Blue rain fell down and Jeremy watched it from the inside of a little café at a seat near the window. He wondered how many more rains he might see before he died and this thought made him scrunch his face into a weird shape. He thought he should get back to his girlfriend who was waiting for him at the apartment, but he kept watching the rain.

He got up and left his espresso and newspaper on the small, cast-iron-legged table. He felt a pressure in his chest and saw that as he walked across the café everyone gave small glances from the comfort of their tables. The barista called out from behind the counter, over the radio, for him to come back soon and he called back in thanks and said that he would. A man in a black coat looked at him from behind a newspaper.

He walked out onto the street under an awning and the sheer rain sent-up mist onto his face. He put his collar up and his hat on and realized he’d forgotten which way he’d come over toward the café from. Left? Right? A blue wall of rain and shifting dark buildings were all around like paint. He remembered before he came to the café he was at his apartment, but between then and now? Jeremy retraced his steps in his mind, trying to close the gap between this present moment of unsure direction and form when he stepped beyond the threshold of his apartment, he remembered where he’d gone straight off from his apartment because his girlfriend called out to him as he walked out, “Have a good time at…”

Now he remembered that he did not actually remember where she had said for him to have a good time at because he remembered that as she had begun her sentence he sensed a reservation in her voice like something dark, brooding, ominous was behind him when she said it and her words trailed off in his mind. A good time, he thought, a good time, a good time. Where might I have a good time? He thought. He felt the mist from the street let up just for a moment and he felt like he’d been standing still for too long, that perhaps if he started walking, instead of over-thinking, that suddenly he would be home, or on the way, and laugh at his unnecessary misremembrance but as he began to walk up the street he wondered still what had happened between his walking and his leaving his apartment earlier today.

In fact, he thought that the longer he ponders the more likely he will never remember. Now Jeremy actually began to laugh at this entropic misremembrance and as he laughed water shook from his face. It mustn’t have been raining like this when I left, he thought, otherwise I ought to have brought an umbrella. Where might I go between my apartment and a café on a non-rainy day? He thought. Where are the places I go anyway? The park? Work? Out to walk in random alleys? Jeremy smelt sweet tobacco from somewhere in the rain and saw tiny, emberlike flickers from the side of a building at street level, as he approached, humanoid figures emerged from the mist standing at the threshold of an open door to shabby apartments, two men and a woman were smoking from pipes and puffing out the door into the rainy street. Jeremy waddled toward them, “Excuse me, do you mind if I step in here with you?” Jeremy said to them, the three figures standing in the wide threshold of the door were mere indications of human shapes.

“Come on, then.” A man said, and as Jeremy stepped under the awning that was above the door his vision slowly accepted the faces of the three figures. As he shook off his hat, he realized that he must have seemed but a swaying, vague figure in the rain to them.

“Come into the hall then.” The woman said, and Jeremy stepped between the three of them and leaned against the wall which squished the water out of his coat making a little puddle at his feet.

“This is Jerome and Johnson, and I’m Mary.” The lady said, “I’m the landlord here, what is it you’re doing out in the rain?” she puffed from a pipe and Johnson passed her a silver flask in a leather pouch which she sipped from.

“This must sound silly, but I’ve forgotten how to get back to my apartment.”

“A bachelor like yourself lives alone then, how unfortunate, here, jog your memory.” Mary the landlady handed him her pipe and Jeremy took it and began to puff heavily on it.

“I live with my girlfriend.” Jeremy said

“Ah! So you don’t want to go back is that it son?” Johnson said, each word brought on new smoke.

“Oh sorry hon, must have forgot the way.” Jerome said

“I really do wish I could tell why suddenly everything seems so hazy.” Jeremy said

“Whenever I can’t find my footing, I close my eyes, and imagine I’m at the edge of the Himalayas, far off, a thousand and one miles away from anyone else, looking over the peaks and valleys, breathing, cool and comfortable. Or perhaps on a busy, sunny, nude beach, my feet in warm sand, sea-salt in air, the consistent watery shuffle of tide and distant laughter. Or hovering, above a cold lake surrounded by deep, pine forests breathing.” Johnson said,

“That’s all fine and good but I just look at my watch.” Jerome said

“I haven’t the time to get lost.” Mary said, “Now, son, if you keep hogging my pipe I’ll have to start charging you rent.”

“Oh yes, here. Well if it were the case that mere meditation could bring me back to my apartment I think I ought to have been back already. And speaking of, what time is it? I’ve misplaced my watch.”

“Misplaced his watch too, are you sure you haven’t just left the sanatorium son? It’s six, son.” Jerome said

Six, Jeremy thought, and he looked out the door frame between the three smokers at the denseblue rainystreet and realized “Six” told him nothing. Then he thought that it could have been morning, or evening, which further blurred his memory of when exactly he might have left.

“In the morning or evening?” Jeremy asked, and the three laughed as though he were in on some great, ancient comradery, some unbroken solidarity with them in the doorway. Jerome handed Jeremy his pipe and Jeremy continued to smoke while Johnson emptied his pipe onto the street and reloaded it from a brown bag.

“Right, well, I can’t quite stay here all morning and evening smoking, I ought to be getting out. Thank you for the reprieve from the rain.” Jeremy said, and Jerome took his pipe back and handed Jeremy the metal flask wrapped in leather. Jeremy emptied the remainder of the flask into his mouth and asked for another smoke to clear his palate. Johnson handed him his pipe and Jeremy filled the threshold with smoke that slowly drifted and dispersed into the rain. 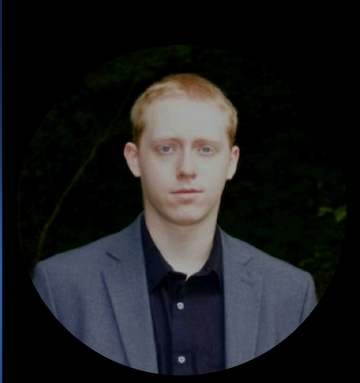 Kile Zomar Lowery hails from northern Georgia and just graduated with a degree in English literature and a minor in philosophy from Georgia State University in Atlanta. An advocate for art in all its facets, Lowery loves playing drums, reading, running, and collaborating with other artists.