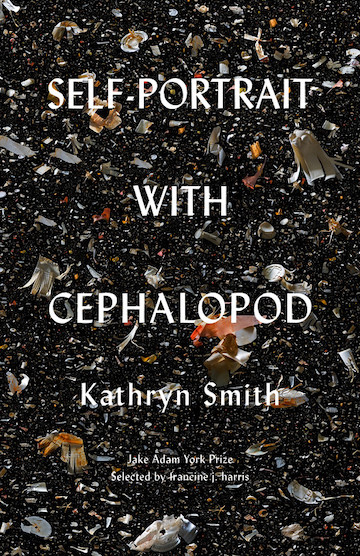 Self-Portrait with Cephalopod opens with a three-line quote from Tess Gallagher, “You / could die out there. / You / could live forever.” Kathryn Smith has chosen a wise quote to enter her third collection of poetry. Due to Gallagher’s clever line breaks “die” and “live” are stacked on top of one another, appearing in complete tandem. This is the exact feeling Smith’s poems invoke: the ever presence of death while one keeps breathing in everyday life.

Immediately after Gallagher’s quote the reader is dropped into Smith’s first poem, “Ode to Super Friends and Nature Television.”  Written in a scattered stream of consciousness, Smith begins to list the things she can’t control from “birds with nowhere to land” (pg 1) to “jungle ants with parasitic skewered brains” (pg 1) to the world’s wobbling axis to stillbirth to ocean levels rising. With all these building concerns, the reader senses the impending dread along with Smith. At the same time there’s still this comedic desire to find joy as Smith adorns herself with “pants the color of a sea cucumber” (pg 1) and covers her “mammary glands / with a boneless bioluminescence.” (pg 2) The reader also wants to put on their “cephalopod ring” (pg 1) as if to click theirs with Smith and shout, “Wonder Twin powers, activate!” (pg 1) Because even though the world may end, wearing an octopus shirt can do wonders to remind oneself there are things still worth living for.

This dark humor is sustained throughout Smith’s collection, every so often shining through all her existential crisis. After the opening poem, Cephalopod is divided into four reflective sections. Each section Smith takes a deep dive into aspects of her life and experiences with death spanning through time: current, past, and future.

What is our position in this world? Smith plunges headfirst into this immense question requesting the reader to reconsider boundaries of society and nature in the first section. She assesses how humans have become so involved in technology, media, and capitalism that humans themselves conflict with nature. “Photos of Pig That Appears to Have Blue Fat Beneath Skin Shared on Social Media” is an exemplary poem. If the title doesn’t hook the reader, the anti-Ode format will: “the internet, / it knows me, it says / recommended for you:” (pg 10).

Smith queries and quarrels with a higher power in the second section of Cephalopod, “Dear wrecker / in the ruin, dear great keeper of forecasts / and dust” (pg 29). Several poems are even written in a religious form: psalm, parable, spell, and meditation. Smith comes to find more solace in sandy shores contemplating creation through broken shells than an almighty designer orchestrating destruction.

The reader travels back in time with Smith as she contemplates her childhood, especially growing up in Washington state and how its geography shaped her as a person. The jump in time isn’t the only difference in section three. Smith switches poetic style from enjambed lines and short stanzas to dense prose and heavy narrative. The tone also shifts especially with the title poem, “Self-Portrait with Cephalopod and Digitalis Purpurea.” Smith discusses the serious topic of suicide in budding pubescent girls. The shocking imagery of swallowing foxglove juxtaposed with an octopus coaxing her bones from the sea floor feels too romantically dark for this point in the witty, philosophical collection.

However, Smith doesn’t disappoint. Time begins to lapse back as the metaphysical reflections all come to an accumulation in the last section. As the mystical cover art of Cephalopod implies, the reader is swimming in Smith’s dense stream of consciousness, such a collage of images is presented, probed, and posed. The reader must sift through all the filth and beauty to find what they are looking for, as Smith doesn’t give them any answers. Instead she pleads, “Tell me the formula.” (pg 70)

Smith’s poetry collection was selected by francine j. harris as the winner of the 2019 Jake Adam York Prize. It’s easy to see why. Her collection is a timely critique of environmental concerns including global warming, forest fires, and species mutations leading to extinctions. On top of this, Smith balances vast topics of religion, nature, technology by asking thought-provoking questions: Is there a higher power that inflicts suffering? What is the reason for human existence? How do we live with trauma and death?

Cephalopod is not for the faint of heart. As Smith takes the reader along this treacherous journey not as a guide but as a companion. The reader will desire to come back to the text hungry for relief, as Smith does, only to find “pockets heavy / with rocks and shells, ancient / litter, evidence of a life / lived at the edges of things.” (pg 35) 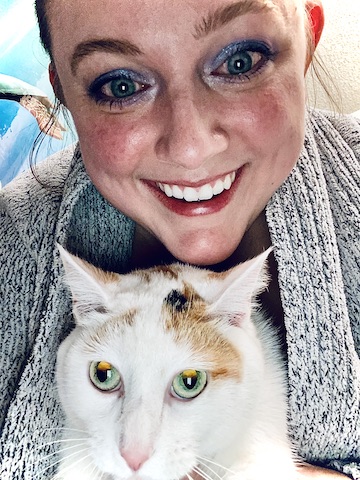 Larissa Larson attends Hamline University’s MFA Creative Writing program in St. Paul, MN, and assists with editing Water~Stone Review and Runestone Literary Journal. Outside of school, Larissa works at a used bookstore, explores the many lakes with her partner, and watches scary movies with her calico cat, Athena.