Have you ever played with one of those sticky splat balls?

They were those gummy balls that you threw against a surface and they would splat, then slowly reform into their original shape. When I was five years old, I would spend hours and hours playing with one and appreciating all its goo and glory. They came in shapes of eggs, tomatoes, eyeballs, and smiley faces. Personally, I was amused by the egg-shaped one. I loved watching them hit the wall and spread flat until the shape became unrecognizable. Then, slowly, but surely it began to unstick to the wall and form into its original shape–falling into my hand once again.

During this age, I was at my mother’s dental office most afternoons. My mom refused to pay for daycare, so after my half-day at kindergarten, I would stay with my mother as she grinded at people’s teeth. I would sit in my mother’s glass-walled dental office and throw one of those sticky splat balls until I heard my mom yell, “Anak, dudumihan mo ang bintana ko!”1 from one of the operating rooms. I would quickly look around the waiting room embarrassed and cautious that one of my mother’s patients heard her talking to me in our native tongue. After watching for any side eyes or judgemental looks, I returned to my mother’s office where I was able to play with the ball of goo in peace.

Going to a predominantly white private school, I was the token Asian kid. In fact, aside from the international students, I was the only Asian American girl at my high school for three years. Honestly, it really didn’t phase me. I learned from a young age to “walk the walk” and “talk the talk.” My parents never hid my cultural identity from me. They spoke Tagalog at home and fed us Philippine dishes growing up, but there was nothing they could do to keep me from becoming “whitewashed.” As I walked the halls of my white school, went to my white friend’s family dinners, and watched TV shows with mostly white casts, I couldn’t help but adapt to my environment.

Besides, I kind of liked being the token Asian kid at my school. I was able to have my own “party trick” as I would explain to my friends as I was younger. I did this perfect balancing act where I was Asian enough to be unique, but not Asian enough to be singled out or weird.

As Hannah Montana says, I was living the best of both worlds.

Mind you, I had no idea what I was doing back then. I didn’t have any other Asian American friends to understand that this wasn’t normal. I had no reason to. Sure, I felt out of place sometimes, but when I got the occasional comment of “Don’t worry you’re not THAT Asian” or “You know, you’re pretty for being Asian,” I called it a done deal. A success story really.

It wasn’t until I was sixteen and sitting in my World Literature class, that I realized my “party trick” proved to be a farce. The class was taught by Ms. Frey who gave off enough bravado to fill the whole room. She was known for her pink-walled classroom and her love for dark chocolate. She was also notorious for making even the quietest of students speak up about literature and poetry in class.

For this reason, everyone came with a page of notes every time we read a poem or prose. That particular day we were discussing “Fish Cheeks” by Amy Tan. From the beginning, I was tantalized by this piece of literary gold. “Fish Cheeks” centered around a young Amy Tan having a traditional Chinese dinner with her family–accompanied by her very white and not-so-Chinese crush, Robert. In this essay, Tan saw how her Asian cultural identity was being compromised by her desire to fit in with her American peers.

I had never related to a piece more. I had even written a page of notes and paragraphs of analysis to supplement the discussion. But, as I sat with my peers, I couldn’t speak a word. I sat there, frozen.

Too scared to admit that I resonated with the piece. Sharing my notes meant admitting I was different. I felt like I was betraying the facade I had perfected and rehearsed for so many years.

You know the anxiety you feel before you know you have to present in class? Where you’re constantly rehearsing what you’re going to say that you drown out everyone else who is talking or presenting?

That was me for a full 54 minutes of class.

I sat there thinking and rethinking what I was going to say. I was finally going to admit how hard it is to want to be white and American when I am most definitely a brown, full-blooded Philippine American. I had 16 years of un-conceptualized thought that I knew I needed to vent, but I couldn’t muster the courage.

There was even a point in the discussion where the room went silent. The conversation seemed to die out. I swear to this day, as Ms. Frey asked the class if there was anything else in the essay that had caught our eye, she was looking straight at me.

I am now 20 years old, and on paper, it may seem that I have overcome the cultural identity issues that I had battled in Ms. Frey’s pink room. I now work for the San Diego Asian Film Festival where I dedicate hours to uplifting AAPI voices, and it is some of the most exhausting yet fulfilling work I have ever done. As an aspiring filmmaker, I look to champion diverse stories and make sure that the minority feel heard.

On March 16th, I was lying in bed, doing my daily scroll through Twitter, when I first read the article that explained six Asian women working at a spa had been shot in Atlanta. I felt nothing. I scrolled over to my work’s Slack channel to see if anybody was sending messages about it. I was met with several of my coworkers sending in infographics that read “#StopAsianHate.” My boss sent in a statement regarding the shooting and pleaded for us to repost and boost it on social media.

I emptily stared at the screen and exited out of Slack.

I’m extremely not proud of how I reacted. I knew it was selfish and cowardly to not want to take action right away. But once again, I froze. I was confused. I have dedicated my life to uplifting Asian voices, and I am constantly trying to keep the conversation of Asian American stories circulating. However, when there was imminent danger involving being an Asian American woman. . .I. . . excuse me for still not having words to explain why I froze quite yet. . .

But I knew once again my identity caused me uncharted discomfort that I could not pin down.

I went to bed that night surprisingly able to ignore the bad feeling I had in my stomach. I was able to log onto my Zoom class the next morning and go on with my day.

It wasn’t until my mother texted me the next day to ask how I was doing that I broke down and began to sob. I have watched my mother carry the same vulnerability that those six Asian women had at the massage parlour.

I am five years old again. It’s dark outside, and I am sitting in my mother’s glass-walled dental office. She is always the first one in and the first one out. Her office isn’t in the best part of town, so when nightfall hits, the shopping complex where the office resides becomes a different place. There are strange people constantly lurking around the corner. Women clutching their purses. Loud men are always yelling at one another from the smoke shop two doors down.

Nervously, I watch my mom as she takes a trip to the car to grab a box before we lock up the office. Sticky splat ball in hand, I tell myself that I am ready to take on any man, perpetrator, or monster looking to take advantage of my mother. However, I must helplessly watch behind the glass wall as my mom takes on the world without me.

I throw my sticky splat ball against the office wall. Watching it hit the glass and expand so thin that it doesn’t seem that it will ever go back to its original shape. But, every time, the ball of goo and mishap somehow becomes whole again.

1 Child, you’re going to get my windows dirty! 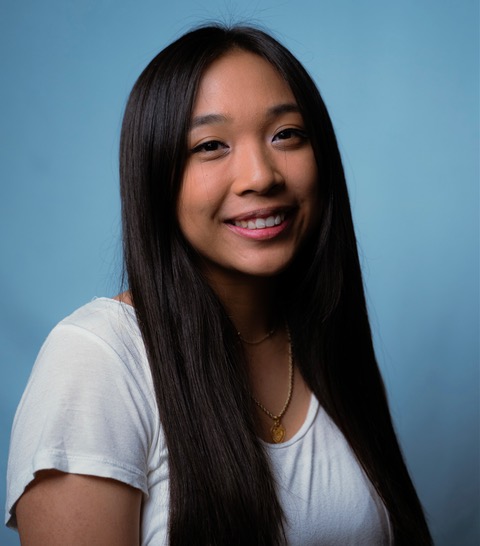 Grace Ramos grew up in Highland, California, where her addiction to reading film scripts and writing haikus for her middle school crushes developed into a deep love for writing. Her guilty pleasures are end-credit scenes, olive oil on vanilla ice cream, and purple inked pens. If Grace isn’t sitting in front of an open word document, she is hopping on film sets as a production assistant where she has had to simultaneously get turkey bacon for a celebrity dog and cater to Jamie Foxx’s stunt double. This is her first publication.