Editor’s Note
Volume Six: the sky would be safer than the ground

The poems, stories, and essays we offer you in Volume Six represent one document for hope.

Runestone always seeks out the best undergraduate writing we can get our hands on. This time around our editorial board was moved by the quality of writing we found for reasons beyond just aesthetics. Our editorial board, who are undergraduates themselves, spent the semester facing impossible realities from a dying planet to the continued rise of fascism in this country. With these facts and other daily encounters with the grim qualities of a time-of-crisis, our students were ever mindful of a responsibility to engage the ethics of our art form.

Our title this year comes from Arizona Hurn’s poem “how to be a human being.” We especially took to heart the poet’s command to “look up as if the sky would be safer than the ground.” In the context of the poem’s argument, this has nothing to do with inviting reverie, but rather confronting the ordeal of being alive. The poems, essays, and stories in this issue all embody the paradox of looking yonder without longing for escape.

What you will find here is work that represents that best of its kind. The excellence of the writing will speak for itself. I want to underscore that that excellence is a reflection of the discerning student editors who worked tirelessly to bring these works to you. With invaluable help from our associate editors, Robyn Earhart and Wendy Nicholas, our students pulled off a real feat: 20 undergraduates who see literature as a matter of life and death worked together despite conflicting passions and convictions to bring to you this document for hope. It was a gift to me to witness this effort unfold. We wish the literature contained within to be a gift to you as well. 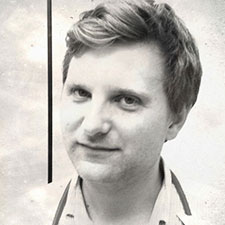 Richard Pelster-Wiebe‘s award-winning work has screened widely at international film festivals including IFF Rotterdam, Media City, Cannes Cinéfondation, FIDMarseille, Festival du nouveau cinéma Montreal, UnionDocs Center for Documentary Art, and several others. He is the recipient of grants from the Princess Grace Foundation, the Jerome Foundation, the Minnesota State Arts Board and the Iowa Arts Council. Richard teaches courses in Creative Writing and Digital Media Arts at Hamline University. He is the Experimental Cinema programmer for the Minneapolis/St. Paul International Film Festival (MSPIFF) and co-curates screenings for Cellular Cinema at Bryant Lake Bowl in Minneapolis.