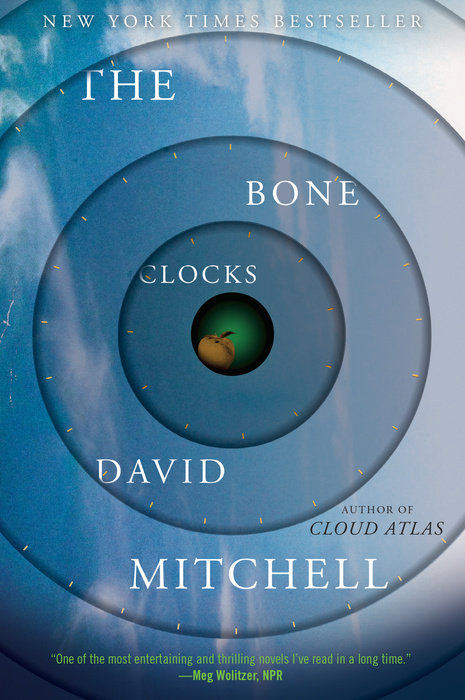 The Bone Clocks by David Mitchell was the recipient of the 2015 World Fantasy Award, long listed for the Man Book Prize in 2014, and described by Stephen King as one of the best novels of 2014. Mitchell’s book encloses several fiction genres including elements of  science, historical, and post-apocalyptic fiction with a light garnish of relevant political commentary. Mitchell weaves a splendidly multifaceted story through the prosaic voices of five individuals who all have their part to play in an unknown and invisible war between two tiers of fantastic immortals—those who would sacrifice the innocent for the own gain and those who would see balance and peace endure. The cast of main characters include: Holly Sykes, a young woman who hears voices she refers to as the Radio People; Hugo Lamb, a Cambridge student with a propensity for manipulation; Crispin Hearshey, an author trying to rectify his life after falling from the best seller list, and a psychologist with more secrets than can be imagined. These main characters, with a whole host of varying minor characters reflect Mitchell’s considerable skill as a writer.

The Bone Clocks is broken up into six separate sections, each of which is narrated by one of the five previously mentioned main characters. Each one of these sections are written with a breathtaking amount of prosaic detail. Mitchell, without sacrificing his own particular style, breathes life into each narrator, packing in detail after detail, allusions, slang, witty remarks. As a result the book and the plot move like an incredibly well built and well oiled machine all due to the unique and realistic nature of the narrators. This can be clearly seen in the following quotes:

“What now? Go home? I’d rather stick pins in my gums. Mam’ll make me steaming shit pie, dripping with shit gravy, and sit there smug as hell watching me eat every shitty morsel, and form now until the end of time, if ever I’m anything less than yes-sir-no-sir-three-bags-full-sir, she’ll bring up the Vinny Costello Incident.”

“He was doing quite well until the last sentence, but if you bare your arse to a vengeful unicorn, the number of possible outcomes dwindle to one. By the time I’d put the drinks on a handy shelf, She-Goth Two had indeed extracted a hatpin and flown and Monsieur Le Critic, who topples operatically…”

Mitchell goes on to further incorporate a tactful political, environmental and social commentaries that we as society are still struggling with today. Instead of producing a work that is sermonizing and pontifical, Mitchell relies on acute subtly to guide the reader to see what is behind the curtain and provide a clear illustration of a very near and possible future. There is no compromise of plot as he delves into what would usually be considered hot button topics such as the American invasion of Afghanistan, or the energy crisis, or the deterioration of the environment due to pollution; each of these facets simply act as building blocks for the story.

An impressive work of literary fiction, Mitchell has successfully created a novel that not only touches the imagination of readers with fantastical wars, immortal beings and the unknown, but includes insightful and profound themes concerning the human condition and the small but substantial impact we can have on the world around us.

Genni Callaway is a current BFA student at Hamline University and self proclaimed time traveler. When not flinging words on paper, she enjoys listening to music, exploring places that ought to be left alone, and attempting to cook.