REVIEW:
On Immunity: An Inoculation, by Eula Biss
Runestone, Volume 1 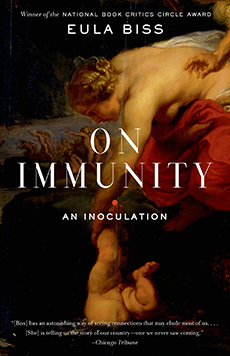 On Immunity: An Inoculation
Eula Biss

Although On Immunity: An Inoculation was just published a short time ago, it has already become one of the most talked about books in recent memory. The New York Times Book Review placed it in their top ten books of 2014. And in February of this year, Mark Zuckerberg chose it for his book club– timing that coincided with the major measles outbreak in the US. Author Eula Biss explains the title, and the On Immunity’s raison d’être, early on in the book:

When I search now for a synonym for protect, my thesaurus suggests, after shield and shelter and secure, one final option: inoculate. This was the question, when my son was born– would I inoculate him? As I understood it then, this was not a question of whether I would protect him so much as it was a question of whether inoculation was a risk worth taking.

This question, the risk of inoculation, is what sent Biss on her way when she began her research in 2009. But uncovering the scientific explanations is only the first layer. Biss goes under the skin of the facts and examines the history of misconceptions surrounding them– and this is an enormous task. Biss weaves medical history, hard science, philosophy, motherhood, and even vampires together on these pages, but it all has a very concrete tenet: the human body itself.

One of the notable things about this book is the structure. The text is broken into thirty nameless parts that are too short to be considered essays in their own right (the longest is just seven pages). These parts spin off each other– one may address a novel subject (say, Dracula as a metaphor for the spread of disease) that will reappear in a new context several sections on. It’s this clever craft work that separates On Immunity from historical or scientific nonfiction. Eula Biss is a scholar, but she is undoubtedly an artist as well. This is apparent in her statement regarding those thirty nameless parts. At the AWP Conference in Minneapolis, Biss said she long debated what to characterize the parts as, when the “obvious” (her word) struck her: the thirty sections were thirty bodies, each distinct but dependent on each other for meaning.

This idea– the interdependence of bodies– is the crux of On Immunity. Biss examines herd immunity and the misinformation that vexes the skeptical (one improvement, she suggests, is rechristening it “hive immunity,” as the connotations and metaphors implicit in that language are much better suited to the concept). She dissects thimerosal, triclosan, DDT, and their truths and untruths. She writes us down to our beginnings in the womb and the cells in our bodies to illustrate the cosmic mutuality of our lives. Biss frequently muses on the notion that, in terms of biological composition, we are more other than we are self. And likewise, the boundaries of our individuality cannot be concretely defined. Like her book’s thirty sections, we are interlaced with our communities.

Biss brings balance to this socially charged material. The depth of her research is apparent: often, we are in scene with her as she sifts through rows of books and stacks of articles, or attends immunology classes. But rarely does she accuse anyone of ignorance or malice. Instead, she tries– and succeeds– in understanding the rationale of those who forgo vaccination. The answers are tied in a complex web of privilege, mythology, and politics, but by some miracle, Biss unravels it all in a cool and cadenced voice.

Vital to the book is Biss’ own narrative as a new mother. The birth of her son was in the inception of the research project that would eventually become On Immunity. “My son’s birth brought with it both an exaggerated sense of my own power and my own powerlessness.” This is what sets On Immunity apart from any scathing exposés regarding public health. Biss is aware of her own biases and anxieties, and what those lend to her methods. At the book’s heart is the recognition of parental responsibility, and the earnest search to wield it with as much care and precision as possible.

Such responsibility can be devastating. At AWP, Biss described it as “struggling toward knowledge while being overwhelmed by information.” Often on her search, the sheer volume of information was a roadblock as much as it was a gateway. “By the end I’m still overwhelmed, but I feel like I know something.” Perhaps that’s all the clarity any of us can hope for. On Immunity will overwhelm and challenge you, but in a most welcome way, and by the end you’ll know something, too.

Sarah Basil focuses her studies on creative nonfiction, and loves to explore hybrid and graphic genres as well. She graduated in May 2015 with a BFA in Creative Writing and a minor in English literature. Her work appears in issue 6 of Dirty Chai Magazine.