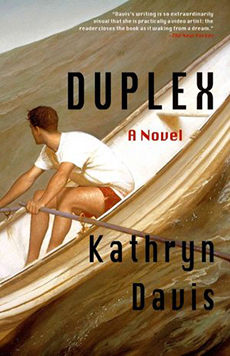 “You can have all the information in the world and what good does it do you?”

This line called out to me to delve deeper into Duplex by Kathryn Davis. One could give the readers all of the information in the world, but what good would that do? What information should the writer give, and what should the readers expect?

Kathryn Davis’ Duplex gives the reader a quaint suburb, quiet, with a woman walking her dog. And suddenly, it turns in the direction of the Twilight Zone, focusing on the way this place hinges on what is real and what is not. The actual duplex is no longer a home for these characters, but an interdimensional hinge between space and time, swinging the readers back and forth. Giving us insight and then not.

The readers first meet Miss Vicks while she walks her dog, and the scene seems normal and real. Until we learn that her neighbors are robots. Then, scows descend from the heavens to pick up the dog’s poop, and a sorcerer, who in the next paragraph is revealed as Miss Vicks’ lover, drives up the street. He can’t see the inhabitants of this street, only that it is, “crawling with souls like the earth with worms.”

The story gets more unusual and Davis explains: “The most important thing to remember is that a duplex’s properties are stretchable but they aren’t infinite. One minute the opening will be right there in front of you, and the next minute you won’t even know where it went.” Such a statement could stand for the entire story. The story turned me into Alice, falling down a rabbit hole. The real and unreal are sewn so tightly, you can’t see the seams, and thus you will get lost – not entirely sure when the story takes place or what this book actually is about. Never mind the fact that you don’t know the narrator except for an ‘I.’ I was in a labyrinth so vivid with detail that I could see, smell, touch, and even smell it, but I had no idea where I was going. And I was fine with that.

Duplex defies genre and storytelling expectations with its world where humans, robots the size of needles, and Bodies-without-Souls coexist. It hands you all of its details and stares at you, expecting you to just stop worrying about trifles like time and place and meaning and just digest the story. The novel is like a series of interconnected plot lines and details that swell to create an intoxicating atmosphere. Davis is able to smoothly transition between characters, thoughts, dreams, and descriptions so that the reader will continue the story at complete ease. Just don’t skip lines. And don’t stop. It’s something that should be read in its entirety, allowing these details to wash over you without analysis.

In the brick houses the clocks kept ticking away the time, chipping off pieces of it, some big ones piling thick and heavy under the brass weights of the grandfather clock in Eddie’s parents’ hallway, others so small and fast even the round watchful eyes of the cat clock in Mary’s parents’ kitchen couldn’t track their flight.

Such a line left me breathless, and underlining in a hurry. I swear my entire copy is underlined, marking Davis’ great details. Clocks now taking action against time, chipping off pieces like it was a stone. Something sturdy yet temporary.

The crickets were rubbing their hind legs together, unrolling that endless band of sound that when combined with the sound of the sycamore trees tossing their heads in the heat-thickened breeze could cause even a girl as unsentimental as Mary to feel like she’d just left something behind on the porch stoop she couldn’t bear to live without.

I honestly don’t even know what to say, just wishing to leave a long list of lines Davis wrote and marvel at them, hoping one day I’d find such a way of writing. Davis here is able to characterize Mary in the same breath as giving us an entire setting to imagine. We hear the crickets chirping. No, no longer chirping. Just them unrolling that endless band of sound. Can’t one also imagine the trees tossing their heads within a hot breeze? And now with this original and pertinent image, feel nostalgic about some part of their childhood?

This is how the book takes you in, giving you detail after detail, creating such a vivid world that you cannot bear to leave it. Nothing else seems important anymore.

When I finished Duplex, I worried for a moment that I had only read half of the book, flipping anxiously back through, searching for unanswered questions. I saw the ordinary things: tuna casserole, skinned knees, and a dachshund’s ears. Then found myself once again with the flying scows, robots, and a magical creation called a ‘Mary bean’ that Mary uses to drift across the ocean to other continents and through wormholes. I stopped. That was it. That was all of the information and also none. I was on the hinge, looking at the door before me, wondering if maybe, just maybe I could push it to get a clearer view of the world. Maybe if I read with the intention of understanding… No, I’ll just leave my bucket outside and watch as the details rain from the sky in the form of colorful beads. Catching its parts without trying to make it whole.

Allison Nordman is a Creative Writing major with an English and Business minor. Her favorite writers are Anton Chekhov and Ray Bradbury. Besides reading and writing, she loves to paint, finding inspiration from the Cubism movement. She lives in the ‘burbs with a pup named Murphy who barks… at trees.