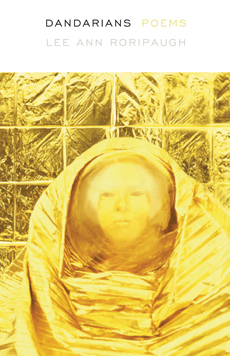 The word “Dandarians” might conjure up an image of a group of people, perhaps a tribe of nomads or a race of aliens. However, as Lee Ann Roripaugh explains in Dandarians’ first poem, “The Planet of Dandar,” the book’s title was inspired by her Japanese mother’s mispronunciation of the word “dandelions.” Roripaugh goes on to imagine what Dandarians are: “On Dandar, we are partial to the theme song from Hawaii Five-O. We like the color yellow. All the best dresses chosen by mothers for daughters come in the color yellow. We eat osembei and sometimes mochi after school with hot green tea, speak our very own pidgin English when my father’s at the office” (Roripaugh 4). The rest of her poems have this same element of delightful surrealism and thought-provoking wordplay, and several are centered around words she misunderstood as a childhood or words her mother mispronounced.

This is Roripaugh’s fourth book, and like her other books, Dandarians explores themes such as having Japanese ancestry and being a woman, and, much like Beyond Heart Mountain, her poems are strategically sectioned off into five parts, and become increasingly emotional with each new section  However, unlike the poems in her previous three books, all the poems in Dandarians are prose poems. Her poems look more like lyrical bits of prose on the page, because they don’t have the line breaks commonly associated with poetry.

Roripaugh’s use of poetic sentences, split into neat paragraph-like stanzas, allows her pieces to read like stories. A few of her poems are several pages long, but this doesn’t slow down her momentum or cause the reader to lose interest. In fact, one of her longest poems, “Femanint,” tops out at six pages but is arguably the most emotional poem in the collection. Roripaugh begins by describing her mother’s mispronunciation of the word “feminine,” then gradually builds up to a story of her not meeting her parents’ expectations and ultimately experiencing abuse and its aftermath. While poems dealing with such weighty subject matter can be difficult both to write and to read, Roripaugh manages to craft a piece that is surprising, heartbreaking, and frustrating all at once.

Lee Ann Roripaugh’s Dandarians effortlessly weaves in reflections on ethnicity and the meaning of words. In addition to having vivid visual imagery, her poems also have unique sonic and textural qualities. This is particularly evident in poems like “Griots’ Signposts,” where a reader can nearly see the steam rising off the bathwater and hear the drum solos of woodpeckers. Before embarking on the journey that is Dandarians, be prepared to immerse yourself in sensory details combined with witty insights regarding language itself.

Jody Peters is a graduate of Hamline University. She studied English with a Concentration in Creative Writing. She primarily writes poetry, but is currently working on a fiction piece about the adventures of two surfer bros. When she is not writing, she can be found playing the drums or attempting to play the harmonica.