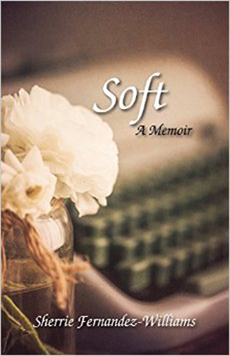 In her inaugural memoir, Sherrie Fernandez-Williams explores the darkness and light of her formative years through sinuous prose that reaches beyond the page to the reader’s heart. The book is a testimony to the power of words and the strength of spirit that can move them into a story that sings with soul.

Growing up in the Farragut Housing Project in Brooklyn, New York, Fernandez-Williams struggled against racial and social class biases from her earliest years in school. She places these personal struggles in the larger context of racial and social class struggles within her community, documenting how larger conflicts influenced the interactions between teachers and students and left their mark on her soft, gentle heart. Fernandez-Williams uses scenes rich in sensory and emotional detail to describe how the internalization of this negativity led to immobilizing self-doubt and fear, especially at the end of an abusive eighteen-year marriage.

While the pace of the narrative moves quickly, there are many areas that invite a moment of silence and pondering from the reader. Fernandez-Williams’ deep faith manifests itself in a variety of beautiful, wise phrases that speak to the power of perseverance, contentment, and above all, the importance of the writing process. She writes candidly about the challenges she faced in the process of negotiating her identities as a mother and writer, and in doing so shares insights into the value of writing:

A person was only a writer if she wrote. There was the hope, at least, that in that act of selfishness her words might intersect with the life of another just in time.   Choosing to believe that there was altruism in writing enhanced my desire to be a responsible “co-creator” with the Divine, as Madeline L’Engle said.

After Fernandez-Williams went back to school and received her MFA degree in Creative Writing, she fell in love with a wonderful woman who helped bring light back into her life. This happiness allowed her to find a job at a university where she helped students find their talents and build their careers based on their passions. In doing so, she fulfilled another life-long dream:

I had always wanted to be a practitioner, on the ground with people who simply needed to be inspired to believe in themselves and treat others with a kindness that stemmed from inner wisdom. That was what I always needed.

Fernandez-Williams’ story is one of negotiating various identities, which will appeal to readers interested in the deep workings and resilience of the human mind. The tension of her prose has a resonance that can be attributed to a careful balance of trauma and hope. Each chapter opens with a detail of her first meeting with Madison (who later became her partner), and arcs outwards from this reflection to a different fragment of experienced memory from Fernandez-Williams’ own history. The encounter becomes a kind of chorus for the book, at times repetitive but understandable in the context of the chapter’s content.

One of the most pleasing craft elements of the memoir is Fernandez-Williams’ eye for details like color and emotion, which lead to metaphors and images that leap off the page into the mind’s eye like gems. In revealing the ugliness and vulnerability of human nature, she achieves a gracefulness that carries immense power. Soft is luminous, brave, and a thought-provoking read.

Sophia Myerly is a third-year student double majoring in Creative Writing and Psychology. Her genre of choice is creative non-fiction. When she is not writing, she can be found collecting inspiration from art galleries or long walks in nature.