“Why do you always have bruises on your thighs?” Kameron asks, with me on his lap in the recliner in his living room. It’s a question I have come to consider myself. Maybe I’m getting blood clots from my birth control. Or maybe I ran into a cart at work. But I cannot recall a moment where I hurt myself at work, and I’ve been on birth control for years; the bruises are more recent.

“I don’t know,” I say. I continue to stare at the TV, Live PD, as a man that lives 30 minutes away is arrested for drunk driving. Kameron rubs the bruises on the outer part of my leg, then moves his hand to the band of my shorts. I pretend to reposition myself. His hand falls from my waist. He tries again.

When I was fourteen, my hymen broke. My mother cried. She thought I had finally gotten my period. As I stood in the doorway of the bathroom, peering at the droplets of blood in my underwear, I could hear my grandmother in the kitchen. “It’s probably just her hymen,” she told my mother. “She just got done riding her horse.”

I walked out of the bathroom in time to see my mother, who had her head in her hands, look up at my grandmother and smile. I knew what it meant, but I thought that the hymen could only break during sex. Does this mean my first time won’t be painful?

In high school, there was a kid named Cord whose blood didn’t clot. Every day he wore the same gray shirt and acid wash jeans. The guys at my lunch table would joke about him: “Don’t hit Cord, he’ll bleed all over the place. Poke him with a pencil and he might die! Hey, do you dare me to walk up to him and act like I’m going to hit him?”

The jokes went on. The more they talked about it, the more I felt the blood rush to my face. Blood has always made me uneasy, but the idea of it leaving the body—unstoppable and free-flowing— was too much for me. In my head I pleaded for them to shut up. I prayed that I would never see Cord’s blood leave his body. I hoped that it wasn’t true that blood could reach the surface and never stop.

One year after my hymen broke, I got my first period. Mom cried again, while my grandmother clapped her hands excitedly.

That day my grandmother took me to Walmart to get pads, tampons, and Reese’s Cups. The thought of putting a tampon in made me queasy, and when I tried to later that day, my legs shook and my skin turned pale. I wouldn’t be able to put anything inside myself until I started dating Kameron. My mother told me that she knew Kameron and I were sexually active because I was suddenly able to tolerate tampons.

Years later, when I am dating Kameron, I go to Walmart with my grandmother to help her with grocery shopping. I tell her that my back is sore.

She looks at me and jokingly asks, “Have you been having rough sex?”

A bruise is blood or bleeding under the skin due to trauma of any kind. This trauma can include the time your brother ran into you with his bike, that time you fell off your horse, or even things you choose not to remember, like how your ex treated you in the bedroom. You can’t quite picture the exact moments he would hit you, or forcefully push your legs apart. The four years of blood under the skin proves it. It’s years later when it finally comes through the surface— free-flowing and tender. 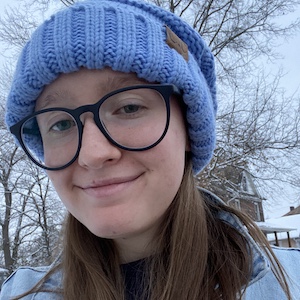 –
Mariah Lanzer is an English major with a minor in creative writing at Kent State University. Her work, “A Fragile Running Back,” was published by Uncomfortable Revolution.