ONE
2020, Carson’s Bay.
This little backwater is calm – always calm – even when the wind on the main lower lake tousles water into rough whitecaps. It is an excellent place for a buoy field. Here, my father’s boat rests: the second buoy from the right, the first row out from the docks. It has been moored there longer than I have been alive. I know her well, the Charrette. Her name means: an intense final effort made by architectural students to complete a project. A man motors past in his speedboat, asks my father if he is an architect. No, he responds, but the man we bought the boat from was. He named her for the final sprint to the finish line, wrought in the ghostly memory of hair in my eyes, spray in my face, water curling over the opposite rail, mast tilted waveward by the press of wind in tightly sheeted sails. I love the moment in a race when you look back over your shoulder, pick out your opponents’ sail numbers, calculate the angles of tacks and the distance from the finish line, the boat lengths between you. I love the moment when your breath catches – or maybe it was the wind – as you realize you will make it first. I love the worn teak rails and the clean white prow of the boat that carries us there.

And despite my love, or maybe because of it, I fear the Charrette too.

Two
1882, Orono Point.
George Brackett has lived on this point since 1880. It will later be renamed Brackett’s Point in his honor, but he doesn’t know that yet. Today, he is accepting the position of commodore for the newly founded Minnetonka Yacht Club. As commodore, he can still race – and does, in his yacht Ida, which he named after his first daughter-in-law.

He has one other duty: as a community leader, George Brackett handles searches for those reported or suspected to have drowned in the lake.

Why do I fear the Charrette? There is a moment. A moment when you’re driving upwind, where the rail beneath you lifts out of the water with the tilt of the boat and the opposite rail dips ever closer to the waves. A moment where everything hangs in balance. You teeter, trusting the keel below to balance the force of wind and your own momentum. Then a gust. The rail surges up and you lean back until you feel you must be standing nearly upright above the water; if you turn your head, you can see the boat’s bronze-painted bottom. And suddenly, a 700-pound lead fin seems like an awfully small counterweight to pit against unruly wind, unassailable water.

Three
July 12, 1885. Somewhere off Lookout Point near Wayzata Bay.
Sunday. The morning promised a sunny summer day, but by 4:30 p.m. Charles Hardenbergh stands outside his home on Lookout Point watching two things: a ferocious tempest, and the Minnie Cook. Aboard are ten people:

Their children Mary, Harvey, and Luella.

They are about to become intimately familiar with the inside of a thunderclap. Hardenbergh loses sight of their boat. His spyglass peers through the greedy squall for a glimpse of the Minnie Cook. In her stead, he finds only hats and coats bobbing in the waves. The storm passes.

Hardenbergh and his sons row to the site. Around 5:00, Celina Rand’s body is found and floated ashore. Around 7:00, a boat captained by George McDonald’s father drops a line sixty feet to the lakebed. It catches. Captain McDonald Senior pulls his son’s body aboard.

Come early evening, only a few rescue boats remain. One final rowboat snags something: “This is heavier than one.” Dragged up from the lakebed, searchers recover fifteen-year-old Harvey Rand. His arms wrap tightly around his older sister Luella.

They are entrusted to the care of George Brackett, former Minnetonka Yacht Club Commodore, who has set up a temporary morgue in a boathouse.

When I was small enough that my life jacket still had a parental handle on the back, I loved leaning over the rail of the Charrette. I told my mother I was looking for fish. I did not see many fish. Here is what I saw instead:

As we sail out of Carson’s Bay, we pass an x-boat regatta set up just off Minnetonka Yacht Club’s island headquarters. The x-boats belong to their sailing school, designed to introduce kids to the art of sailboat racing. From our sky-stretching 22-footer they look like toys in an impossibly big bathtub: jibs only slightly taller than an adult, booms so low to the rails that the sailors must bend double at the waist to avoid being hit in the head. But their size isn’t incongruous, and this is why: they are captained by twelve-year-olds. I count sixteen little mains, sixteen little jibs, bobbing in the amiable breeze. Thirty-two slightly built tweens with the force of wind and wave wound through the slim ropes in their hands.

For every action, there is an equal and opposite reaction.

They sail from the docks to the starting line, which is just off Orono Point. Aboard the Belle of Minnetonka, a band plays and spectators cheer.

Past the x-boats, we finally spot our starting buoy buried against the opposite shore. The radio begins its chatter: Whaler One takes wind readings, determining where to drop the windward mark. The committee boat, bobbing by the starting line, relays the start sequence to the boats converging from around the lake. Amidst the familiar proceedings comes an announcement:

“Life jackets are not mandatory today per club policy, but a man drowned two days ago because he wasn’t wearing a life jacket…your choice.”

Thursday. During a double-belated-birthday celebration, a man and two women jump off their pontoon to help a friend struggling in the water. Three of their party are quickly back on board. The fourth is still underwater.

He has not yet been found.

With the advent of streetcars around the lake, Twin City Rapid Transit expands their business to the water itself. They launch a fleet of “streetcar boats,” nicknamed “yellow jackets” due to their streetcar-gold paint. Six sisters:

They charm enamored visitors, who can now access any two points on the lake for a dime. Their route takes them Southeast of Big Island, near where DJ Stokes would drown trying to help a friend over a hundred years later. They steam past the Yacht Club’s Island, past Lookout Point where the Rand family was dragged from the mud, and into Wayzata Bay. Between Excelsior and Deephaven, passengers can get off on Big Island, docking at Point Comfort, and perhaps walking along the shoreline to Point Charming, or Sunset Bay.

Twin City Rapid Transit realizes that streetcars, and streetcar boats, are falling from vogue in the heyday of private auto and yacht traffic. The 1926 Yellow Jacket season lasts only six weeks before TCRT recalls all the boats. Three are sent to a scrapyard. Three are stripped of ornament and engine and scuttled in deep water.

Their 70-foot-deep muddy tomb lies just off the North tip of Big Island.

Our sails sway in the softening breeze, the racecourse behind us. Finish line crossed and usual announcements over, our radio crackles to life again:

“Attention MYC sailors. As you sail back in, you may see a sheriff’s boat around Lighthouse Island. They are conducting a grid search and will not give you the right of way; stay far away from them. Look out for a big whaler with a dark hull.”

The x-boat regatta is still under way. Sixteen tiny hulls surrounded by lightweight motorboats waiting to scoop up anyone who capsizes. X-boats are much shakier than our Charrette. Across the bay, lights flash over the canopy of a dark-hulled boat.

Diver Jerry Provost discovers the remains of one of the scuttled streetcar boats.

Jerry Provost owns an underwater construction company; together with a local dredging company they loose the wreck from its mire. Three cranes, three barges, and eight airbags later, the boat has a name again. The Minnehaha sees light filtering through green for the first time in over fifty years. Perhaps when she feels the tug of wind and wave, her two sister ships below shiver in unspoken delight, whispering between fish the throb of gutted engine and creak of rotted wood.

Maritime Heritage Minnesota has since taken hundreds of sonar images of the lakebed, searching for more scuttled ships. Sonar: sending acoustic pulses into the water that echo back when bounced off an object below. A revolution – so much more thorough and genteel than dragging a line. Sonar, used in research, in history, and search and recovery.

Our stern clears the X-boat fleet and I un-cleat the halyards for jib and main. Over the rattle of crumpling sails, over the hubbub of tiny bobbing hulls, over the womb of silent shadows waiting to be reborn, lights flash over the canopy of a dark-hulled boat, listening for echoes and parsing out squares. 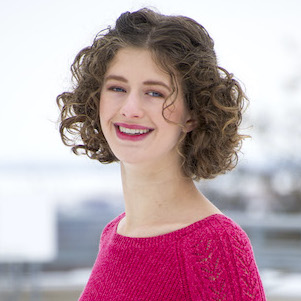 –
Anne Amen is a senior at St. Olaf College in Minnesota, pursuing a B.M. in trumpet performance and a B.A. in English. Her collection of interests ranges from piano and ballroom dance to making jewelry and handbound books. This is her first publication.