REVIEW:
On Imagination, By Mary Ruefle

REVIEW:
On Imagination, By Mary Ruefle 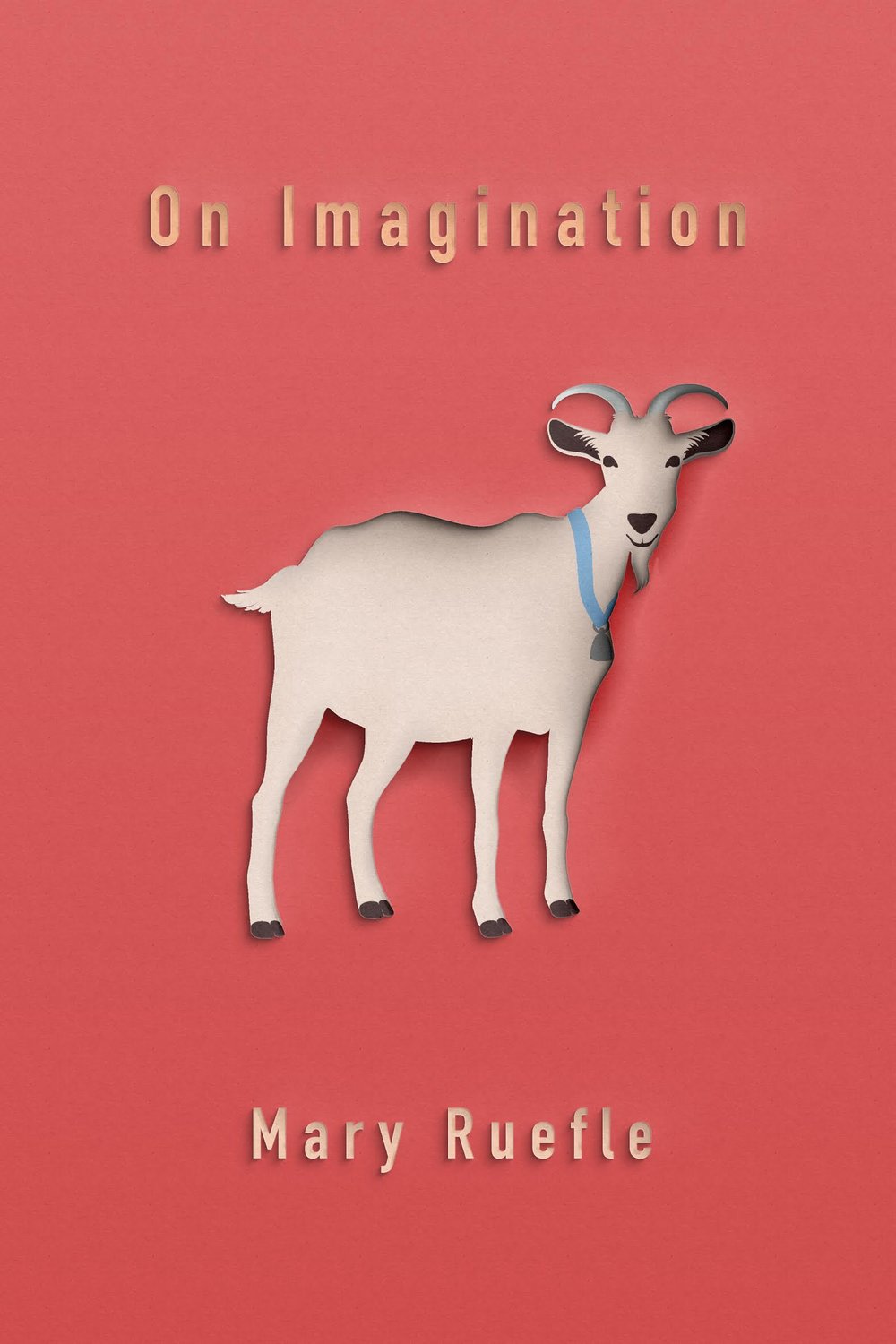 “Is a plastic fish a fish?” (13) is one of the multiple rhetorical questions Mary Ruefle asks throughout her book, On Imagination.

From her numerous poetry collections – A Little White Shadow and Traces of the Blast to name a couple – to her latest prose collection, My Private Property, Mary Ruefle now turns her view on to humanity’s mental creativity in her cleverly titled book. She takes a descriptive approach in exploring its depths, however she states her explanation of what imagination is to her before diving in, being upfront with the reader and directly addressing them to begin this deep conversation.“I am going to tell you now, before I begin, what my conclusion is to my thoughts on the imagination: I believe there is no difference between thinking and imagining, and that they are one,” (5)

The first six pages of text read like each page is creating its own world that defines imagination with thin, spider like threads linking them together. Ruefle gathers a collection of small examples, both her own and not her own, within these pages to portray the different facets of imagination while mixing in a sense of reality along the way. She also creates the feeling of elongated pauses at the end of each page by making the page feel complete on its own. These elongated pauses leads the reader into contemplating the narrative examples she sets forth. The second half of the book feels longer, the words spilling over into multiple pages, creating a continuous flow of long examples rather than the short snapshots from before. The premise of a primer, a child’s first book that teaches how to read and write, is the main chain link that connects the first half of the book to the second half.

Ruefle’s intriguing use of drawn illustrations relating to certain stories on the coinciding page of text interweaves a fun multimodal format, allowing for a more immersive reading of both visuals and text. These drawings become focal points, visual manifestations of the imaginations that she draws from. For instance, the image of a head of lettuce becomes the symbol for Ruefle’s story concerning a young woman not eating her salad due to her imagination. “I once sat next to a young woman at dinner who believed that the CIA had bugged her salad, and it terrified her, and she was unable to live a normal life because of her imagining this terrible thing,” (7). Her choice of the word “bugged” alongside the imagery of the salad highlights and makes use of the lettuce head illustration on the opposite page of the text. Essentially, these illustrations quickly become prompts that the reader can use to recall where these narrative examples are in the book and how they relate to the ever growing cloud of imagination.

Ruefle’s voice engages the reader, including the reader in her ruminations on imagination.  Her directness combined with rhetorical questions develops a conversational dialogue between Ruefle and her audience. These questions are meant to focus the reader on how imagination can influence them and how they influence imagination. Her tone takes on a form of whimsicality–think along the lines of Ruefle being Willy Wonka and her factory is imagination–while still being grounded in reality through her narrative examples. “Someone says, “The door is ajar,” and you hear them say, “The door is a jar.” How can a door be a jar? What’s in the jar of a door? And it gets you thinking about doors and jars,” (13). Her playful rhetoric allows the reader to actively contemplate their own sense of imagination.

Creating this interesting dynamic between the reader and herself, Ruefle’s own voice and ruminations molds her into a guide following alongside the audience while they explore the complexity of imagination. She leaves room for the reader to draw their own conclusions in defining their own mental creativity. While the structure of the book may feel slightly disjointed to some, Ruefle effectively uses this format to show the different facets and depths to the imagination and lay out her stories and statements as narrative examples. Drawing the reader in, Ruefle accompanies them as they both sink into the ocean of imagination while examining its reflections and refractions.

Sandra Vang is a senior at Hamline University majoring in English with a concentration in creative writing and minoring in Chinese. When she’s not writing or reading, she is spending her time hanging with friends somewhere in a corner. Currently, she is working on a few short stories and microfictions.