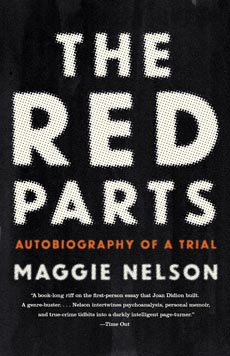 As Maggie Nelson investigates the 1969 murder of her aunt Jane, she is surprised to find that she is not alone in the investigation. Her mother received a call from Detective Schroeder, who, like Nelson, has spent significant time on this cold case and is nearing the arrest of a man believed to be the killer.

The reopening of the case coincides thematically with the April 5th re-release of Nelson’s true-crime memoir, The Red Parts, as it puts the limelight onto dark content that brings back more questions about life and death than concrete answers. Nelson reflects on past deaths in the family and how there is no correct formula for grieving.

These reflections bring about the deeper topic in the memoir, which is how the human psyche deals with trauma and pain.

Nelson’s writing style is pervasive and probing. She searches not only within the depths of her own thoughts but also the heart of the American infatuation with sex and violence against women. Nelson’s aunt Jane was believed to have been murdered by a serial killer who also raped his victims, but her aunt was the only one who was not sexually abused. One of the fascinating aspects about The Red Parts is when Nelson describes how she starts to get her own “murder mind” after paging through documents and photos detailing the murders of multiple young women. Nelson begins to imagine herself committing violent crimes, and the honesty and openness of these thoughts allow for introspection on the reader’s part.

The multiple references to films and books in American culture both include and implicate the reader in the broken culture Nelson sees. Nelson’s deep experience with topics like murder, grief and love all show through in her ability to look deeper into herself. The wide range comes about through a natural progression of thoughts and emotions that the reader follows Nelson and her family through as they sit through the trial of the man believed to have murdered Jane.

When she sees this man in the courtroom she writes, “Where I imagined I might find the ‘face of evil,’ I am finding the face of Elmer Fudd.”

Honest insights and comedic anecdotes are followed by grim descriptions of the photographs of her dead aunt that were used in the murder trial. As a professor of writing and avid reader, Nelson is well-aware of how far she can push the reader. The teetering on this boundary reflects her mindset as she reflects on the loss of loved ones through break-up or death. A frantic but focused prose is established as the reader is guided on a fast-paced, interwoven journey of the trial and Nelson’s childhood.

One of the more impressive aspects of this memoir is its ability to feel empathy for all involved in the trial. Nelson acknowledges more than just her family’s emotions which makes for a more well-rounded and complex narrative. A particular chapter titled simply with the suspected killer’s first name looks at the way the media latches onto small details like whether a murderer could be compassionate towards a victim. These types of inclusions build off of Nelson’s style that often ends chapters with numerous questions that leave the reader wanting to keep reading for answers.

Before her murder, Jane was going to law school to become a social justice and civil rights lawyer. Nelson’s sister Emily followed in similar footsteps to become an activist of her own, and these roots shine through in The Red Parts. Nelson touches on how the media and even murderer’s obsession with attractive white women overshadows the stories of minority groups that don’t get coverage or the time of day.

These types of nuances and commentaries are spread intricately through the detailed layers of Nelson’s book. As the pages come to an end, one is left with multiple thoughts about the state of America and its hypersexualized culture. During a movie where a woman gets abducted by a serial killer, it is Nelson’s mother who tells her “Let’s give it one more minute – maybe something different is about to happen.”

Jake Kjos is a senior Creative Writing major at Hamline University. His focus is in creative non-fiction and he loves to play videogames and watch Minnesota sports in his off time.