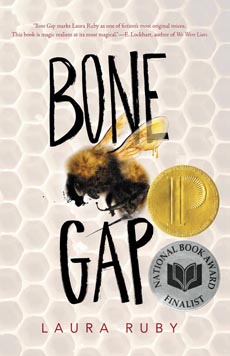 In her newest book, Bone Gap, National Book Award winner, Laura Ruby, does right by magical realism. In this YA novel she bridges the gap between reality and the magical by adapting a myth older than history itself. Despite its genre, Bone Gap is more than a novel for teens because it focuses on an issue that affects us all: what happens when a loved one leaves?

Finn O’Sullivan is a seventeen year old boy left to live with the guilt of witnessing the kidnapping of one of his best friends, Roza. Dubbed “Moonface” by the town bullies, the Rude brothers, for his tendencies to get lost in his head, he’s endearing in an awkward way. After Roza’s disappearance, many of the townspeople question his sanity, for who can’t remember the way a friend’s kidnapper looked? Knowing he is the only one who can find Roza, Finn tries to piece together what happened to Roza and how she just disappeared. With the help of Priscilla Willis, aka “Petey”, Finn discovers something odd and powerful about the small town he calls home.

Inspired by the myth of Persphone and Hades, Laura Ruby weaves a story from multiple directions; a complete story only the reader is privy to. Using multiple points of view, the overarching tale of what happened to Roza is filled out with vivid imagery and manipulation of the language. An example of such a moment comes halfway through the book. Roza’s chapter ends with: “She pulled the knife from the folds of her brocade gown and plunged it into the white flesh under his jaw, where it sank all the way to the hilt.”

Immediately after, Finn’s chapter opens: “Finn jabbed the shovel into the Earth, stamped on the footrest, tossed the dirt over his shoulder, jabbed, stamped, tossed, jabbed, stamped, tossed.” Not only is Ruby able to bridge one point of view with another, she is also able to let the image of Roza stabbing someone haunt the reader a little longer.

Other secrets, some that are much bigger in the grand scheme of the novel are revealed piece by piece. Like why Finn can’t remember the face of the man who took Roza; the truth behind Charlie Valentine, who holds critical information about Roza’s disappearance; and the mystery behind the black horse that appears in the rundown O’Sullivan barn with a goat named Chew. Every secret is carefully crafted and hinted at, leaving the reader to find, and interpret them before the big finale.

The two elements that really make the story come alive are the characters, specifically Finn and Petey, along with the setting of Bone Gap itself.

For Finn, his motivation through the entire novel is the same: find Roza. But stemming from his need and desire to find Roza, is his love for his older brother Sean. Roza was good for the brother’s relationship; Sean had someone other than Finn to look after. Finn’s friendship with Petey is almost accidental, he thinks she’s the most beautiful girl he’s ever seen. He also struggles with the same issues many teenagers do; college entrance exams, social interactions with the opposite sex, and more broadly, trying to carve out an identity for himself.

Priscilla, aka Petey, is much like Finn. She too is steadfast, understanding Finn’s need to find Roza for himself and his brother, Sean. They take turns acting as a rock for one another, in times of need. She has been marked as a social outcast, like Finn, not for her lack of concentration but because of her appearance. Self-conscience of her slightly bulging eyes, her wild hair, and fascination with the bees she and her mother keep, Petey is constantly teased. Many girls can identify with Petey, because at one point or another, most have been the victim of rumors or bullying.

Throughout the novel, Ruby constantly plays with the ideas of gaps, echoed in the choice of setting. Bone Gap is a small town in Illinois in the Southeastern part of the state. Not terribly open to visitors, like all small towns, there are people who have lived in Bone Gap their whole lives. Familiar staples of the Midwest give the town life; dirt roads, fields of corn separating houses from one another, and the wet humidity of the summer. Because of its eclectic residents and isolation only small towns in the middle of nowhere can achieve, Bone Gap is the perfect setting for Ruby’s use of magical realism.

My only critique is of the climax itself. When it finally comes, it’s mildly confusing and over much too quickly. It would have been nice to have a little more tension and a larger showdown between Finn and the antagonist.

Bone Gap is not just a novel for teens. It deals with issues like loss, and how it affects the people left behind; how someone or something may not be conventionally beautiful doesn’t mean it is without purpose; and how to move on from the past. Laura Ruby does an excellent job weaving these bigger themes together into a story about a boy searching for his friend.

Abby Campbell is a recent graduate of Hamline University, where she majored in Creative Writing. She is a proud Hufflepuff, James Potter in her group of Marauders, and is more inclined to spend hours on the Internet than do homework. Her goals are loftier than her height and she is currently working to share her stories with the world.