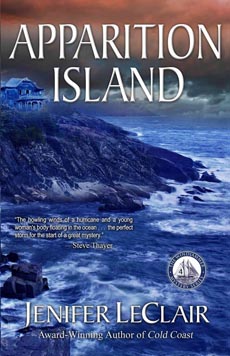 Death and obligation chases a Minneapolis cop all the way to Maine.

Murder, mystery, an ever unfolding list of potential suspects, and a pair of cases are the journey in Jenifer LeClair’s fourth novel featuring the Minneapolis Police homicide detective Brie Beaumont, Apparition Island. The novel is her fourth in the Windjammer Series, featuring tall ships, elusive island folk, and a quest for justice upon Maine’s outlying islands.

Brie left Minneapolis six months ago to find an escape from the stresses and dangers of the Minneapolis Police Department only to find more of the same off the coast of Maine. Now working with the Maine State Police when the need arises, Brie has successfully closed three cases and is hoping there won’t be any more as the tourist season winds down. When the Maine Wind collects a body floating in the Atlantic Ocean, Brie is forced to take her badge and gun out of storage and solve the case of not one but two deaths on Apparition Island.

The novel opens with the passionate death of a famous actress that remains unsolved to the present day. What starts out as an investigation into local lobstermen disputing their territory soon unfolds into a manhunt for two unsolved cases that have occurred almost sixty years apart.

With each item of evidence, Brie must piece together motives, family history, and the truth in a race where every suspect can be reconsidered guilty or innocent. Her investigation takes her across the island, to the Maine mainland, and back. With every new piece of evidence, she has to watch her back, knowing that the real killer might be but a few steps behind.

The novel does an excellent job of taking notes on the investigation in the same way Brie herself would, keeping the reader informed of the progression of the case as if the reader were there, walking the roads of Apparition Island by Brie’s side.

Like most mystery novels, the reader must continually question each character’s motives and methods, asking the right questions and determining not only the who but the why. Even when the case comes to a close, the novel stays true to its objectivity, having Brie try not to reflect upon the outcome of it all but let the reader decide if the events depicted were tragic or necessary, based upon the evidence.

Although I have not read LeClair’s previous works, I didn’t feel like I had any trouble coming to know Brie after the first few chapters. At no time did I feel she acted outside of her training during tense situations she came to face. The conversations and interactions between suspects, fellow detectives, and her friends felt natural and realistic. Like any true mystery, I had my own suspicions regarding who the perpetrator could be, and was just as surprised as Brie when the murderer was revealed in the story’s thrilling climax. When I find my own job stressful and depressing, I might have to find one of LeClair’s earlier novels to find out how Brie fared again.

Overall, the novel kept me interested and there weren’t so many characters in the novel that I ever lost track of them. Likewise, the novel gives the readers enough clues to keep track of everything, as Brie herself must do in her advancement of the case. At no point did I find myself going back to check evidence, as the novel kept track of that for me. Everything felt relevant when it needs to be but didn’t cleverly try to point out something that the reader has to notice. The narrative felt natural and didn’t forcefully place clues or hints to distract or surprise the reader.

Should you find yourself gazing out on a night when you’d rather cozy up with a novel and your favorite warm beverage, consider this novel where truth is elusive and the ghosts of the past can still impact the present in ways even the spirits of the dead could not imagine.

J.D. Delzer is a published author with two novels of adventure fantasy. You can often find him either in front of a computer or with a Nintendo controller in his hands. His three greatest inspirations are nature, novels, and his cat.