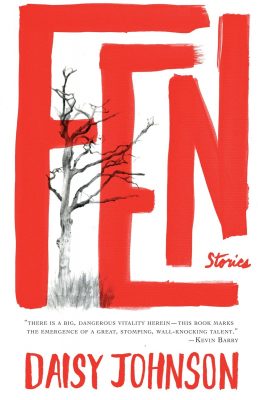 Fen is Daisy Johnson’s first collection of short-stories. All twelve stories are told from a women’s point of view as they experience the unexplainable. One must protect her lover from a jealous house who is also in love with her, three sisters must lure men back from the pub in order to survive, and another must find her dead brother reincarnated as a fox out in the woods. These hauntingly detailed stories all take place in the fenlands of England. Johnson brings these eerie situations to life with careful and descriptive detail. She places clues instead of telling you the facts, a strategy that leaves readers as curious and wonderstruck as the main characters themselves.

A major theme in this collection is sex, which is detailed in a very unusual and imaginative way. In the story “A Bruise the Shape and Size of a Door Handle” the protagonist falls in love with a girl named Margot and her house becomes jealous. In this story the protagonist isn’t shy to describe their sex as erotic and lustful, “Outside her father’s bedroom she put her hand over Margot’s mouth, felt her forefinger slip between the wide, uneven lips. The house dreamt what they would do before they did it.” Johnson describes sex and attraction in every scenario imaginable, and she’s clever about it, never fully stating what is going on–instead she lets the reader wonder.

Each story has a paranormal element, which Johnson also never clearly explains. These stories are puzzle pieces wrapped in poetic diction. In the story “A Heavy Devotion” a mother is cursed with a son that slowly takes all her memories away. “It was no good. He understood now where he’d come from. He’d taken the memory of it from me.” Throughout the book nothing is ever clearly stated regarding these odd paranormal characters, which can be compelling but also frustrating at times. Her poetic diction and lack of quotation marks around dialogue clearly indicate that it’s a stylistic choice. However, in order to appreciate her style, you must be in the mood for puzzles.

In the story “The Superstition of Albatross” Johnson highlights her gift for puzzles. She raises questions and concerns that are never clearly answered. Her poetic and eerie tone almost trip over one another in this particular story, leaving you with a sense of incompletion and confusion. “Because sometimes the sharks grew legs, moaning from the pain: white, thin limbs with bony ankles. They climbed onto the bed and lay down next to her until there were so many there wasn’t room and then they piled on top.” You’re almost certain this is just a metaphor, but with the odd paranormal elements in each story, you begin to question what’s real and what’s not, doubtful of your abilities to interrupt the events correctly as Johnson’s talent for lyrical description can nevertheless sometimes fail to explain the point.

Her collection is unpredictable, thought-provoking, and haunting. Johnson uses her knowledge of the Fenlands of England to conjure up vibrant settings that spark her stories to life. She also leaves you with memorable and strikingly odd characters, concepts, and line-to-line structures. Fen questions and challenges the stereotypes regarding sex, gender roles, and the unknown of this world. Johnson isn’t afraid to make us feel uncomfortable or stunned. Her distinct style and structure brings her collection to light. It isn’t one to gather dust on a shelf. You’ll still be wondering, filling in the blanks—piecing together the puzzles in these stories long after you’ve read it.

Courtney Yokes is a senior a Hamline University who primarily writes fiction and poetry. Her work as been seen in The Fulcrum and The Rapids Review. Like any writer, she works hard to build her publishing credentials, connections, and most importantly her skills as a writer. The world is overwhelming and she’s just looking to make her mark on it.