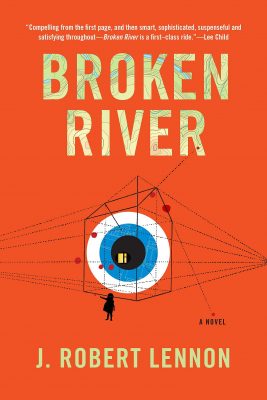 In his most recent novel, Broken River, J. Robert Lennon navigates the genre of a psychological thriller with a masterful hand. The story begins in a house in the city of Broken River where a gruesome murder is taking place and a being of some sort, known only as The Observer, watches everything unfold.

Ten years later the house is finally sold to a family that’s looking for an escape from their lives back in New York City. Each member of this family of three is working through their own personal dramas while trying to keep a crumbling family together. Karl focuses on his art and his unfaithfulness to his wife, Eleanor tries to lose herself in the book she’s writing, all while worrying that her cancer is coming back, and Irina tries to block it out–her family is falling apart by obsessing over the murders that took place all those years ago. When Irina’s obsession brings the killers back to Broken River, things take a turn for the worse in a way only a psychological thriller can deliver.

Lennon’s attention to detail is, while at times almost tedious, amazing in its complexity. Take, for example, his description of the items sitting on a bedside table: “… a paperback romance, a snarled elastic band with several long hairs tangled in it, and a single earring (its twin lying on the floor, in the shadow of the bed)” (7). The whole novel continues in this way, giving the reader so many details that it becomes impossible not to picture the scene. Lennon manages to weave what one believes to be the most insignificant detail into something that later comes into play, whether it be the glass knives Karl begins to make or the stuffed frog a young girl plays with.

With the point-of-view character switching in every chapter, the reader gets to follow along with a diverse cast as the plot moves from gruesome to mundane to gruesome again. During this time, the reader also follows the construction of The Observer, which begins as a removed point of view that evolves into an almost corporeal being, an omniscient presence that watches the story unfold. Its presence is only detected once or twice throughout the entirety of the novel, giving the whole thing an eerie feeling, leaving the reader with a sense of being watched. Though the pace of the novel is a bit meandering, each part plays a significant role in the climax that takes place in the final chapter.

With the addition of a character such as The Observer, Broken River takes a look at the triviality of human impatience and our inability to see the bigger picture. As The Observer evolves it becomes more aware of the future–near the end it’s able to see every possible outcome–but the reader is never informed of what these outcomes may be, leaving one with the feeling that, though every choice may create a different path, there is never much deviation from our supposed “set course.”

Jessica Mausolf is currently a senior at Hamline University, going for a degree in creative writing. While she enjoys writing, reading is her real passion, her library at home attests to that.