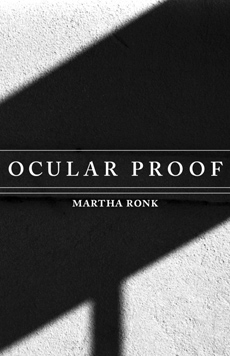 The opening poem of Ocular Proof vividly describes a photograph and the actions of the viewer, beginning with “The tree azalea overwhelms the evening with its scent, / defining everything and the endless fields” and ending “needing nothing from you until, smashing itself on the tile floor, / the present cracks open the aftermath of itself.” “A Blurry Photograph” sets the tone for the rest of the book, where Martha Ronk explores photographs, poetics, and how both are seen as “snapshots” of moments past that are questioned with even any changes themselves—through cropping, Photoshop, or editing—being recognized as moments and documents of the past.

Ronk often uses longer lines, spanning the length of the page, giving her space to issue her contemplative observations alongside startling images. Taking the uncertainty of subjectivity in art to heart, Ronk leaves space for the reader’s interpretation while still cementing the speakers’ visions, as in the poem “Kertesz’s photograph of Martinique”:

a shadow outlined on the other side of frosted glass

Ocular Proof’s beautiful epigraphs—from the likes of Roland Barthes, Walter Benjamin, and Geoff Dyer—accent the book and contribute to the search Ronk has embarked on. Barthes especially complements Ronk’s already pensive voice with his extensive musings.

Ocular Proof is divided into three sections, and while the visual forms of the poems found within vary per section, each has its distinct voice. “Photographs” plays with stanza breaks, while “Information Systems” floats around blocks of text. Most notably, however, is the impressive use of white space in “Shadows and Elegies.” The final poem of the book, “Shadows,” shows Ronk’s meticulous skill with structure, lines dancing around the pages as shadow dances around light:

a shaded bramble implies                   itself
repeated coils generative of burrowing
density of shades, litters of shadows
overlapped and without material form

Ronk’s words float throughout Ocular Proof on the purpose of photography and poetry as documentation and physical proof of memories, before coming to rest in “Shadows and Elegies.” This is where Ronk’s choice of epigraphs shines most, as Barthes and Benjamin both connect photographs with death, as absences and as ghosts—as past things.

Martha Ronk takes both the reader and herself through the lens of the poem’s speakers, and into the shadows of photographs, interpretation, and the past. The use of the line from Shakespeare’s Othello rings true, as if readers had themselves quoted Othello, and told Ronk, “Be sure of it, give me the ocular proof;” and Ronk provides it.

Corva León is a poet and visual artist living in Saint Paul with their cat, Roman.