Writing the Weird, Bizarre, and Impossible

“…most of the books I have written and those I minted to write originate from the thought that it will be impossible for me to write a book of that kind: when I have convinced myself that such a book is completely beyond my capacities of temperament or skill, I sit down and start writing it.”

–Italo Calvino on his writing process

It is not the familiar that sets our minds abuzz with new ideas. The creation of the new is left to the strange. The weird and wacky elements of writing that make us pause to think about things in a new perspective. That is where we can draw inspiration from. And that is what I wish to help understand today.

For me as a fiction writer, it has always been the strange that attracts me. From fanciful imagery of cities put forth in Italo Calvino’s Invisible Cities, to the more subdued sci-fi of Ray Bradbury’s All Summer in a Day, there has always been something that is just so utterly fascinating about a piece that throws convention out the window in an effort to stretch the authors creativity to its limit. It is the ability to embrace what has never been done before that sets truly great writers apart from their contemporaries. Because we as humans always crave something new to mull our minds over.

So this is the question that we face as undergraduates writers, and writers in general: how the hell are we supposed to write something new?

My advice? Write the impossible.

Sounds pretty easy, right? Actually, it is. You see, when it comes to the term ‘impossible’, the definition is actually already set in stone. Based on the Merriam-Webster dictionary, something is impossible if it is either:

So all we must do is write something that cannot occur. It can be something as silly as a banana suddenly appearing in front of us out of thin air, or a goat somehow wandering onto a space shuttle and being blasted to mars, or as serious as world peace or total annihilation. All we must do is think of something that is incredibly unlikely to occur, write it down, and bam: we have written the impossible. Created, through our own hands, something that is completely and entirely new in this world.

Sounds easy, right? Well, it might not always be so.

It’s an unfortunate reality of the mind that we can become utterly stuck on what we already know. Corner ourselves with facts and logic that dictate that we write a certain way, express the same ideas, and generally create nothing of value. And even if we do end up creating something new, or having some grand idea, we may become stuck along the way of writing that idea out onto a page, or somehow be incapable of making an engaging story about what we have to offer. What should be done in such situations? What should we do when we become ‘stuck’?

I’ve been in such a situation many times before, and apart from just taking a break to clear my mind of the writing process, the most effective thing I have ever done is to ask myself a question. And that question is this:

And then my mind is free. So if you ever want to take a stab at writing something wonderfully and truly bizarre, I suggest that you try to write something that is completely impossible and roll from there. And if you ever get stuck, I suggest you start asking yourself “What if” questions to get yourself unstuck. There is no theoretical limit on creation or creativity, and it would be an utter bore if we only ever retread paths that have already been walked upon. So get out there and write something weird, bizarre, and completely impossible. 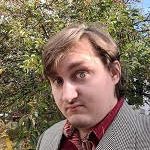 BLAKE BUTENHOFF is a thoroughly odd individual. He is supposedly a Senior of Hamline University’s Undergraduate Creative Writing Program, but no one knows quite exactly how he got into such a position. He enjoys strange works of fiction, hiding out in the quiet corners of rooms, and ketchup on his macaroni.