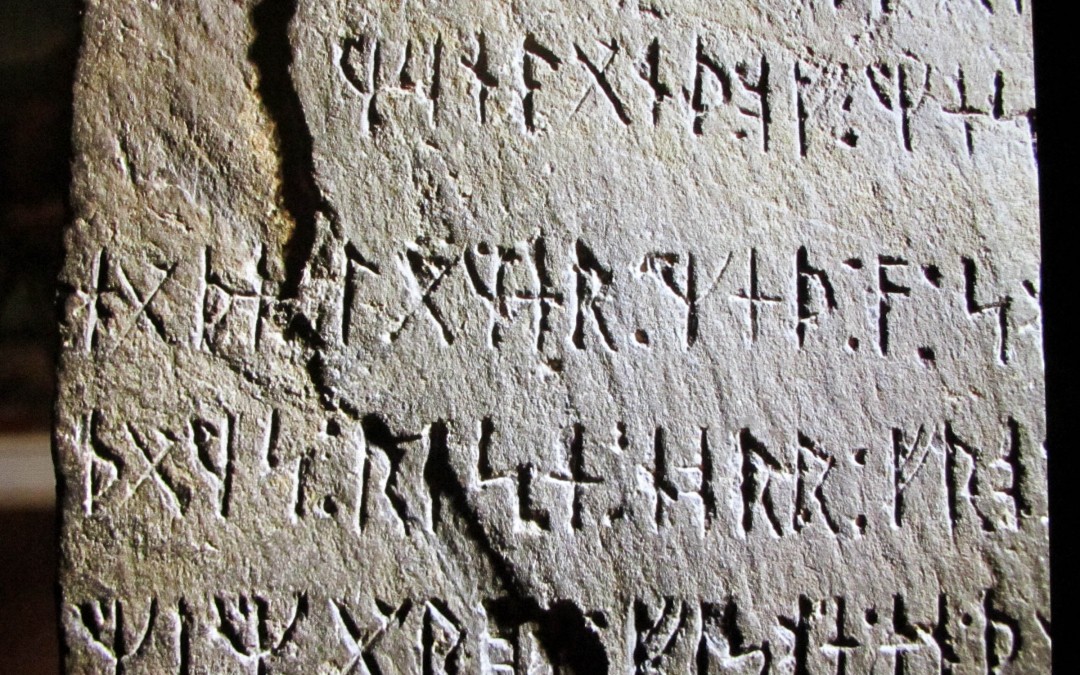 We’re not the only Runestone in Minnesota. Maybe.

The other is one hundred fifty miles up I-94 from where we sit, deep in new snowfall and the slush pile for our first issue. A museum holds what some people argue is the oldest runestone in North America, proof that Scandinavian explorers had made it to central Minnesota by the mid-fourteenth century.

The Kensington Runestone is over two feet long and six inches thick. It’s greywacke, a hard, dark, and gritty kind of sandstone. It was found in 1898 by a Swedish immigrant who was clearing his land of trees. The stone was found tangled in the root system of a poplar.

Its face and side are covered with runic writing that translates as:

Eight Goths and 22 Northmen on an exploration journey from Vinland far to the west. We had a camp by two rocky islands one day’s journey north from this stone. We were fishing one day. After we came home, found 10 men red from blood and dead. Ave Maria save from evil.

(side of stone) There are ten men by the inland sea to look after our ships fourteen days journey from this island. Year 1362

Is it real? Some scholars say no. Ridiculous, they say, that anyone could have traveled from Vinland on the Atlantic coast to western Minnesota in two weeks. While the alphabet on the stone itself is ancient, some scholars say the grammar the author used to write the inscription was more contemporary. But plenty of others champion the stone as authentic, including scholars with recent books.

In 1948, the Smithsonian displayed the Kensington Runestone, when its curators decided that it was important to the American people whether it was real or not. Which reminds me a bit of when Tim O’Brien says, in The Things They Carried, “A lie, sometimes, can be truer than the truth.” Maybe the fact that so many want to believe the stone is real — maybe that’s enough.

Certain things simply are. Other times, truth really isn’t the point. At those times, I’m more interested in what we need to believe and why, in all our vulnerabilities and contradictions. If the stone is fake, then why do we need it to be real? Why do we need that story? Why do we need to think about who its finder Olof Ohman might have really been (he was also a stonemason, for whatever that’s worth)?

The narrator in Ron Carlson’s story “Bigfoot Stole My Wife” says something similar: that he believes in everything. It’s clear, though, as the story unfolds, that he can’t admit to himself that his wife has left him because he can’t get his gambling problem under control. Before Carlson closes the story with “Bigfoot stole my wife. She’s gone. Believe it. I gotta believe it,” he gives us this lyrical paragraph, in striking contrast to the flat tone the narrator has affected through the story.

I’m going to close with that. But regarding the Kensington Runestone — believe whatever you want.