More Than Just Knick Knacks: A Conversation with Lily Crooks, by Noah Topliff 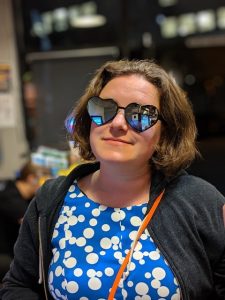 On Thursday October 1, 2020, I had a conversation with Lily Crooks, an established member of the Twin Cities literary community and graduate of the MFA program in Creative Writing at Hamline University. The plan was to speak over zoom, allowing us to see each other outside of the chain of emails that had been our introduction and only form of communication thus far. After 3 crashes on zoom, we elected to speak over the phone. Lily quickly moved to another room with better service as I googled “best phone call recording apps.” We spoke for around an hour. The free-flowing, unedited audio file of that conversation can be found at the bottom of this post. The following excerpts are gemstones and light bulbs, an illuminating understanding into Lily Crooks.

The first piece of Lily’s writing that I read was “Free Fallin’” published in Memoir Mixtapes, August 2020. In it, she writes about her annual family road trip they take to the Black Hills in South Dakota each summer and falling in love with Tom Petty.

Lily grew up in a family where “for many many years, we were not the kind of family where each of us had a walkman”. She was expected to entertain herself on road trips, and spent a lot of time with her own internal dialogue, the place where most of her writing begins to this day.

In high school, Lily was a theatre kid. Finding solace in allowing the “internal loud showy Lily” to come out while playing characters. A lover of not only theatre, but the spoken word, Lily initially thought she was going to become a playwright when she first began looking seriously at writing.  “I love reading aloud. It doesn’t have to be screenplays. I love reading books aloud with friends, or on road trips and stuff like that. I wish we did more of that in my family, but we’ve just kind of started that because I insisted. But I just really appreciate the spoken style of storytelling.”

And so, she wonders how she might be able to inject whatever quality it is about her, or perhaps even the spoken voice, into her written works. “It’s very different writing with the intention to be spoken aloud and/or performed vs writing to be read. Inflection changes the whole meaning of a sentence, and how do you do that on the page if you can’t guarantee that this person isn’t going to hear you say it out loud”?

At this point, I check in to see if Lily has a hard-out I need to be working with (we’re about 40 minutes into our conversation) She tells me I’ve got about 15 minutes. 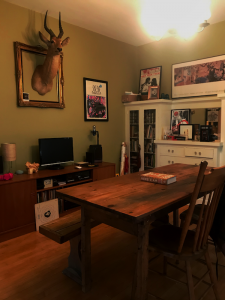 I needed to know where the mounted deer head on her wall came from.

She purchased it on the last day of the Minnesota State Fair, inspired by an interview with Dan Savage where he had a bison head on his wall, from a vendor in the midst of packing up. She gave the vendor $200 cash (the head was listed for $400) enticing him with it being one less thing he had to transport. Then she remembered she needed to take it home on the bus. The deer’s name is Chauncy. 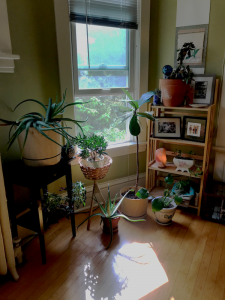 We discussed the concept and importance of having “shrines” in your home. Deborah Keenan was the first person who really brought this idea to her, naming that very corner her shrine. “I never considered it (the space pictured in the photo above) as that kind of space, but it serves exactly the same purpose as a small altar to loved ones who’ve passed on or mementos that are more than just knick knacks. Especially when winter comes, I feel like Minnesotans need a lot of little quiet areas in their home to look at and feel joy.”

Coming to the end of our time I asked her what she was working on. Not just in terms of art or writing, but also spiritually, personally, or in terms of a goal she has set for herself.

Her father has recently passed away, an experience that she’s found speaking about openly has helped in her processing of it. They weren’t particularly close, and as the oldest of his three children, she’s been put in charge of wrapping up his affairs. A task made even more challenging due to COVID-19, making the process longer and unable to get together with her family as much as she’d like. Oddly enough, she says the experience has brought her closer with her younger brother.

Creatively, she’s been revisiting a piece she started a long time ago about her family history. She is also working to be more engaged in community work and mutual aid, and is looking forward to keeping up her momentum in that this winter.

And finally, I asked if she had any magic parting words.

“I don’t think I do. Um, if it’s about writing I hate to tell you that there isn’t magic and a lot of it is work. You just have to do it. Sorry. You have to just sit down and do it. And the best advice I ever got was ‘you can’t revise words you haven’t written’ so you just gotta do it. Your first draft is supposed to be bad. Sorry. That’s a long answer. 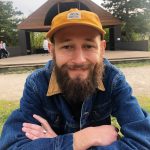 Noah Topliff is an undergraduate student at Hamline University in the final year of completing his BFA in Creative Writing. He spends his time outside of his studies writing and recording music and spending time with his dog and girlfriend.