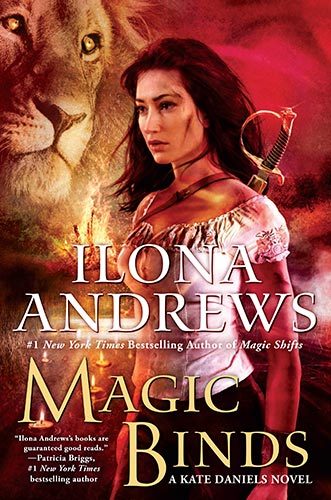 In 2007, Ilona Andrews introduced readers to Kate Daniels, who stomped through Post Shift Atlanta with a sword in her hand and vengeance in her heart, ready to slice and dice bad people into much less dangerous pieces. Fast forward to 2016, there are 9 novels in the main series, 12 novels, novellas, and short stories branching off, and Kate is still as compelling, complex, and confident as ever.

In Andrews’ latest novel, Magic Binds, Kate gets to deal with one of the most relatable and at the same time most far out struggle to date, marriage. In a world permeated with both magic and technology, a wedding is not just a wedding- especially if it is on one of the most magical nights of the year. Never mind the fact that the father of the bride is determined to stop it and Kate is struggling with magic that is beyond her control.

What is so great about Kate Daniels that readers have been enthralled for nine novels?

She loses. All the time. She does not win every battle. She does not find every clue. Sometimes she is too late to do anything but clean up the mess and she certainly does not come out unscathed. Her actions have real consequences for her and everything around her- which is something we see a lot in this novel, with the help of the Witch Oracle.

Another thing that makes this series so amazing is Andrews’ world building. Kate’s world is overflowing with magical forces from all regions and religions, from Arabic djinn to Russian volhvs and everything in between. There is history surrounding the city and its new Post-Shift features, places where the magic runs so deep it never goes away even during tech. It is certainly not the idyllic world, there is still racism and sexism- and now speciesism- but now people have to be a lot more careful because someone can pull magic just as easily as pulling a weapon. It is such an incredibly cool place to explore while you read.

Over the series, Kate’s sharp edges have rounded out some. A former mercenary who is used to lone wolfing it now has to become diplomatic- a skill she never really had to have before. She has allies she can call on, and those allies have forces to lend to her battles. Hundreds of mercenaries, shapeshifters, police officers, mages, and vampires willing to charge forth into battle with her. A woman who was terrified of what her power could do to a child suddenly decides that children would not be so bad. Maybe it is all just part of Kate “wising up”, but it is good to see that not all of her changes. She is still witty and sarcastic. She still tries to solve everything on her own and does not always know when to ask for help. In this book, Kate really has to take the time to re-evaluate who she is and who she wants to become.

The major villain of the novel is the father of the bride, Roland, and this is the novel where he really gets to become a fully fleshed character. Roland and Kate had been estranged for most of Kate’s life- in fact, she had been raised to kill him because he is an evil wizard that killed her mother. Now that Roland is truly in the picture, we get to see more than just the shadowy figure of the evil wizard who is literally millennia old. He is an ancient tyrant who believes he can make the world a beautiful place if only people just did what he told them. Unfortunately, they do not so he has them killed in horrifying and agonizing ways. Every villain thinks they are the hero of their own story, and Roland is no different,

“If only I would just go along with your blatant disregard for your own word, none of it would happen. You’ll pretend it’s really my fault. It’s yours, Father. Your own sister chose to die rather than live in the world you wanted to create” (36).

Roland has this habit of doing whatever he wants. People are either too afraid or too weak to do anything about it, but the few who resist are slaughtered indiscriminately. Except for his daughter. He really just wants Kate to come rule at his side until she too will inevitably betray him and he has to kill her. Just like all of his children before her.

For all of the amazing magic and fantastical elements, there are real life issues at play. A father does everything he can to stop his daughter’s wedding. A woman comes into a great deal of power and fights not to be utterly corrupted by it. Ilona Andrews does amazing work with this series, and this is probably one of the most real to life ones yet. 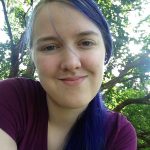 RACHEL BAKKE is recent Hamline University graduate with a degree in creative writing. She can usually be found on a theatre set armed with a drill, writing, or playing some kind of table top game.