In Defense of the Swearing Writer, By Lauren Stretar

Hi, my name is Lauren and I swear. (Sorry, Mom and Dad.) Does it have something to do with my being a writer? Because come to think of it, I don’t think I’ve ever met a writer who doesn’t swear. As my vocabulary has grown larger, the amount of times I’ve been told swearing is unbecoming has increased. So in defense of writers (and non-writers) who swear, I’ve found a list of science-backed studies that show that occasional profanity won’t hurt you. In fact, if used in a healthy environment, it’s even good for you.

A study done by the School of Psychology at Keele University proved people who swear generally have a higher pain tolerance than those who don’t. Other research has hypothesized that swearing can activate your body’s release of natural, pain-relieving chemicals. However, using swearing as a method of pain relief works best when you swear sparingly, so those of us who drop an f-bomb on a regular basis won’t have as much luck. I’ll tell you, I thought I was being really edgy as an eighth grader when I said cleaning a cut was going to hurt like hell, but because I swore, it didn’t. It just hurt. And that was because I said hell.

Those who believe that people swear because they don’t know what else to say are incorrect. In fact, a study done in the United States illustrates that people who swear actually have a higher IQ than those who don’t. This is due to the larger vocabulary people who swear tend to have. If you’re interested in testing this out yourself, get a couple of friends together and have them think of as many words beginning with the letters F, A and S as they can in a minute.

Swearing can give you a sense of calm

In an article in Psychology Today, Neel Burton, a psychiatrist based in Oxford, England, explains that swearing can help increase circulation, elevate endorphins, and bring an overall sense of calm, control and well-being. To quote Elle Woods: “Endorphins make you happy. Happy people don’t kill their husbands. They just don’t.” Therefore, the rush of endorphins you get from swearing can make you happy. When you’re happy…well, let’s just say swearing is a good thing.

In a society where truth is so highly regarded, this is the point that should sway doubters. According to a study done in collaboration between researchers from Maastricht University, Hong Kong University of Science and Technology, Stanford, and the University of Cambridge, there is a positive relationship between the use of profanity and degree of truthfulness. In short, the more you swear, the more ways you have to express unfiltered feelings and sincerity.

Let’s face it: writing is a hard profession. It’s mentally and physically taxing and—on occasion—painful. After killing off my favorite character in whom I’ve poured my entire heart and soul, I need a pick me up. And since I’m not old enough to drink, I’ll take the next best option and say fuck. 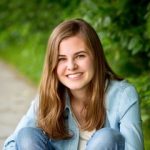 LAUREN STRETAR is a current BFA student at Hamline University. She is primarily a fiction writer, and currently drafting her first novel. When not writing, you’ll find her in the kitchen baking.