How Do I Turn My Idea Into a Story? by Keith Lasser

So, you’ve got this brilliant idea and you think it will make a great story, do you? Well, where do you go from here? That’s a difficult question. You see, everyone’s creative process is different. Writing is not a science. There is no one guaranteed way to get a result. So, now you may be asking yourself, how is the rest of this blog supposed to help me? Well, to be perfectly honest it might not, but you should keep reading anyway because I am going to let you in on my own creative process and maybe you’ll find some of the ways I create useful to you.

So, you already have an idea, which is great! But now you need to allow that idea to grow. What I do first is type my idea up on a word document. Whether that idea is a plot, a character, or a scene, I write it down. The reason I write it down is because I don’t want to forget it, and I may not feel like writing when I get the idea, and that’s a big factor for me. I have certain things that I do to try and trigger a creative state. One of the things I do is listen to music. Not just any music mind you but there are certain songs that make me feel inspired so I listen to those. (There are quite a few of them, but one is called “Evolve.” I’m not sure who it’s by because it’s from an old Gatorade commercial. You can find the entire song on YouTube.) Now music may not be the way to go for you, but the next time you feel like you want to write, stop and think about what may have triggered this feeling so you can replicate that in the future.

So, let’s say you do feel like writing. You’re going to want to build off your idea. Plot ideas are what usually come to me first. For instance, I have a story that started out with me saying to myself, “I want to write a story where a guy fights a dragon.” Now that story is currently sitting at 26 pages, and I want to write a whole series following this character. But how did I do that? Well, I started off by making decisions. I knew it was going to be a fantasy story, but was it going to be high fantasy or urban fantasy? Next I had to figure out who is this guy that’s going to fight this dragon? And why is he going to fight this dragon? Well I thought about my character for a while and got kind of a good idea for who he was, but I wanted more. Something I encourage you to do is to go to Google and search for a “character sheet.” One that I like, linked below, asks a lot of questions and some of them can be used for fantasy stories. I got it from “Fuckyeahcharacterdevelopment.” It has a list of different sheets you can use and character­ creation — the one I like is called “Big Ass Character Sheet.” These things are great. They ask all kinds of questions like, where was your character born? What were his parents like? Favorite food? Music? Etc. There are character sheets for all kinds of genres so some of them may have questions that won’t fit your world, like favorite sports team, but you can just skip those. After you feel like you’ve got a good sense for your character, you can start to figure out what leads this character to your original idea. What was he doing before he fought this dragon? And, why does he end up fighting it? Those types of questions all became easy to answer after I knew my character well.

So, I hope this helps you at least a little bit. The best advice I can give you is to just write. Don’t worry about making your story great until after you have finished the first draft. Any idea that comes to you for the story should go into the first draft (within reason, of course). Making your story great comes during the revision process, but you can’t revise if you don’t get through the whole story first. Writing your first story is hard because chances are you have no idea what you’re doing. But if you just keep writing (even if it’s no good at first) you will get better, and the whole process will just keep getting easier and easier. 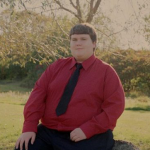 Why hello there! My name is Keith Lasser. Let’s keep this brief, shall we? Things I do for fun: write, practice martial arts, play video games, and other awesome stuff. What I write: Fiction (mostly) Sci-fi, Fantasy, Historical Fiction, Non-Fiction. Published: “The Mysterious Journal” in Anoka Ramsey’s Spirit River Review.