Five Poets Who Do The Internet Right, by Lukas Hall 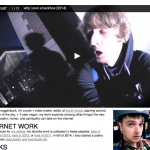 Steven Roggenbuck is the master of combining hilarious-absurd YouTube comedy and inspiring/very serious poetry. Not only can you find the majority of his poetry online, but he truly encourages free poetry for the masses, such as with his second book called “DOWNLOAD HELVETICA FOR FREE.COM.” His poems often center around internet culture and have therefore established quite the following of Digital Natives as fans. 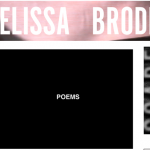 Twitter. Twitter is important. Melissa Broder is a brilliant twitter-er. Her twitter, @melissabroder, discusses the many facets of life including being broken hearted, oversensitivity, depression, being whole, etc. She seems to be an inner-conscious of many 20/30-something year olds. She also writes poetry (she was just in POETRY’s December issue) but really her twitter is basically poetry in under 140 characters. 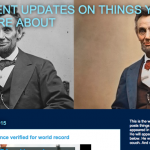 Dustin Luke Nelson is the master of video poetry. Watch his video called “Tuba Player,” which shows eerie black & white film footage over a narration of Robert Wood’s poem of the same name. Or his video “It Happens When You Remark on the Shape of the Only Cloud in the Sky,” which is him narrating (though his voice is extremely distorted) his poem to a video of a train station. He also recently set the world record for longest applause (which of course he filmed). 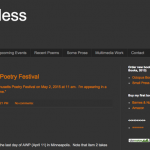 With her amazing website (f)lawless, Amy Lawless posts some of the weirdest, most hilarious blogs out there, including her most recent entitled “CRRREEEEEPPPPPYYYYY” which is as follows “I was just updating my blaaaag, because,well, yolo, and i noticed a creepsville, usa vibe here. What’s up with the number 11?:” She also utilizes podcasts, Vimeo and audio sharing sites to deliver her poetry in non-traditional ways. Amy is the perfect example of using multimedia to reach a wider and more diverse audience. 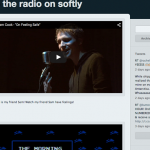 “OCD,” first published in 2013 via Button Poetry’s YouTube channel launched Neil Hilborn as the sort-of face for the YouTube-era of digital poetry. He used the online platform as a stepping stone into making “poetry” his career. He travels around the country to perform and speak about his writing. He also released a album of his poetry with a very nonsensical video as means of getting word out, along the style of many of the more “alt-friendly” crowd of YouTube content-providers. He also is a fantastic way of finding new poets as he posts (Facebook) or tweets about new poets, almost daily, including many of his Button Poetry family members. 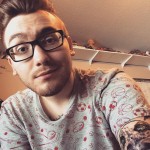 Lukas Hall is on the editorial board of Runestone, as well as an Editorial Assistant for Poetry City, USA. His poems have appeared in East Jasmine Review, Aviary Review, Souvenir Lit, Mojave River Review, and Split Rock Review. He also won the 2013 Patsy Lea Core Memorial Award in Creative Writing, for his poetry.