Finding Poetry in the Funniest Places, by Daniel Schauer

As a poet I am a bit of a language geek. The structure of language from diction to syntax is fascinating and playing with it makes me feel a bit like a mad scientist. However, examining language I think is key to improving writing in general and is not something exclusive to poets.

Digging into the entrails of the English language can seem a little bit daunting especially when you start talking about things like labials, sibilants or begin counting syllables and doing scansion. It can start to look a little like a math equation. Don’t be afraid though, there are simpler concepts that you can use to improve your writing without having to dive into the heavy linguistics, as much fun as that is.

I think one of the more exciting things we did in one of my early poetry classes was looking at the structure of humor (a lesson plan idea from Cody Walker). Humor is all about timing and language. Say the wrong word at the wrong time and it kills the flow of the joke (like that friend you have who is awful at telling stories). The New Yorker has a caption contest each week where one of their artists draws a cartoon and the readers submit captions to go along with the illustration. Then they are voted on by other readers and the best ones get published the following week.

The combination of coming up with something funny and relevant to the illustration plus the 250 character limit (the majority of winners are much shorter) means you have to be incredibly creative with your language. Its something screenwriters for sitcoms do all the time when they are coming up with those oh-so-quotable one-liners or when someone writes a particularly funny tweet. 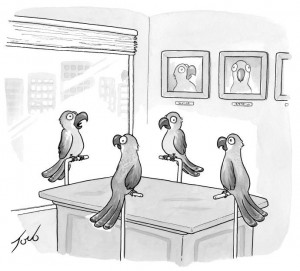 Take this cartoon for example. The winning phrase was, “Don’t repeat this,” three simple words and what would seem like something really easy to come up with, but it’s a little more complicated (and exciting) than that. First, notice that they chose “Don’t” as opposed to do not, and notice how that changes the tone and flow of the sentence, would “Do not repeat this,” be better?

Its an exercise you can do with other things, including your own work. Watch your favorite comedian and notice how they time their jokes and when they take their pauses, see if you can find the punctuation (this also works on Presidential speeches). 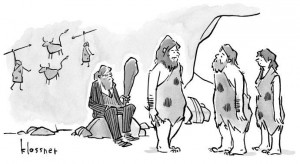 This other caption contest features some unusually lengthy finalists. But the first place finalist, “We have to move out—I just sold a painting,” is really just two shorter phrases linked together. It simulates a sort of build-up and punch line structure with a natural pause (like a caesura in a poem) represented by the long dash before the joke hits you.

The constrictive nature of these contests is what’s so important to pay attention to. The forced structure causes the submitters to think more creatively about how they set up the language of each caption. It’s similar in more formal poetry like sonnets, sestinas, couplets etc. The structure is what forces writers to flex their linguistic muscles.

Really this is just an exercise in taking a closer look at your work and how you are structuring individual sentences and phrases. It works extraordinarily well for dealing with small bits of your work (like an individual line in poetry or some dialogue in a creative nonfiction or fiction piece) in a more in-depth way. 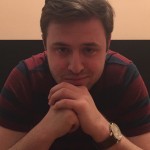 I’m a senior studying English and creative writing. An aspiring editor and poet, I’m really into the art of language. My favorite authors are Walt Whitman, Neil Gaiman, Matt Rasmussen and Ray Bradbury. I also spend a lot of time with my pet fish and travelling the world.