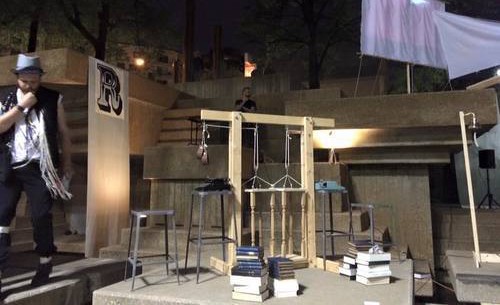 Last summer I went to an event put on by Revolver, a literary magazine from Saint Paul, Minnesota, my hometown.

The event, Write-Fight, was inspired by Moby Dick and included a sword fight, a BDSM-type contraption, and a Chinese dragon, all of which were used to distract writers as they “fought” to create the best piece of writing from a prompt they’d only recently read. Oh, and this was all done outside—with the Minnesota summer air mixing with the clacking keys of the typewriters. The coolest part—and I’m hoping other writers in attendance experienced this—was that I felt inspired after I got home, inspired to create something new and different from what I’m used to.

I got the same feeling at the event Lewis Mundt hosts and produces: New Sh!t Show. Here, writers are only allowed to perform new, unperformed pieces. The fact that the performers haven’t practiced any of the material gives the whole show an unexpected and lively atmosphere. Both of these events were really beautiful get-togethers. They had an edgy and experimental feel that I haven’t seen very often at literary events.

Another Minnesota lit mag that dabbles in experimental events is Paper Darts. They seek to go about “…redefining the way ART + LIT livvvvvve.” Although they have no events scheduled at the current moment, in the past they have had an event exploring the relationship between literature and art jewelry, and brought in illustrators, video game experts, and lit mags (among other creative types) to transform a storefront in South Minneapolis.

All of these events and gatherings throw new life into the literary scene: they show that literature is still a living, breathing, and possibly even dangerous animal, always on the verge of taking a bite out of what we expect to see when we turn the page. 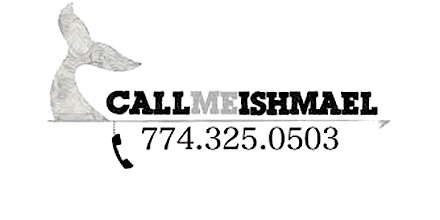 Minneapolis/Saint Paul is not the only place beginning to embrace these experimental, slightly crazy, literary events. A pub-crawl based around literature was formed in San Francisco and has spread to nine cities (with more on the way) including Portland and London. In New York, Call Me Ishmael has a phone you can call to leave messages about your favorite books. You can listen to the voicemails online, and they also host book swaps.

I hope all of these intriguing literary events change the way writers view a blank page. I hope instead of seeing rigid, sometimes formulaic guidelines on the page, they see new dark alleys, caverns, and deep-sea trenches. I hope they see new places to explore with the words that are aching to get out.

I am happy to say that this new way of seeing the page through experimental literary events has already begun to occur. One look at Paper Darts or Revolver will show something that you’ve probably never seen before, whether that is a poem, short story, a translated conversation, or a work of creative non-fiction. I’m crossing my fingers that these refreshing pieces continue to find their way into the world. None of this is to say that regular literary events (readings, conversations, panels) are a bad thing. In fact, they are a great, even necessary, way for the literary community to grow and prosper. It’s just that when I was watching a sword fight at Revolver’s Write Fight and hearing the frantic hammering of keys as the two contestants scrambled to create, I felt fresh and different, excited that literature could take me to such odd places.

If you have any experimental or interesting literary events taking place in your city, we’d be happy to hear about them. What events or gatherings inspire you to step outside of your boundaries when it comes to writing? Maybe when we are down, up, or over your way we can get a little crazy together, literature-style. 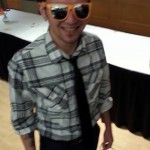 Justin Christensen is a 2015 graduate from Hamline University, where he studied Creative Writing and English. In his free time he likes to dabble in journalism, go to shows, and explore the Twin Cities. Currently, he’s working on a new short story as well as several poems.