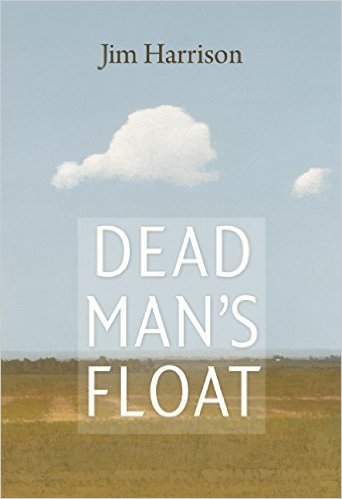 Despite its grim title, Dead Man’s Float opens with a whimsically meta poem titled “Where Is Jim Harrison?” Jim Harrison himself tells us that “He fell off the cliff of a seven-inch zafu./ He couldn’t get up because of his surgery./ He believes in the Resurrection mostly/ because he was never taught how not to.//” Zafu is the Japanese word for a round cushion known for its use in meditation, which makes the idea of comparing its seven-inch edge to a cliff hyperbolic and hilarious. Its juxtaposition with a small amount of exposition about Harrison’s history with religion creates a humorous comparison and also introduces the theme of contemplating faith. You can expect to find this sharp combination of personal criticism, dark humor, and philosophical contemplation throughout the book.

Indeed much of the book can be seen as Harrison painting a beautifully honest self-portrait of his life: his favorite places to travel in France, his affinity for birds of all types, and the horrors of wondering whether he’ll ever be able to do something as simple as trout fish after suffering spine damage. For Harrison, birds are more than just beautiful creatures. They are a symbol of a life free of the complications of the spinal rupture which limit his mobility. As Harrison puts it in the poem “Hospital,” “Without birds I’m dead. They are my drug that lifts me up to flight” (3). Yet despite this vivid and colorfully described escapism through the birds, Harrison admits the dark realization that “Lark or dog I crave the impossible./ I’m just human. All too human” (1). Thus, the illustration of Harrison’s empowering experience battling depression and physical limitations of his injury begins.

Another prominent theme in this book is death. Due to his ailments and his age, Harrison seems desensitized to the inevitability of death for all living things. This has allowed him to be unafraid to make cuttingly truthful judgments about the topic of his own death as is exemplified in the opening words of “Junk Pile.”  “God throws us out the back door/ onto a huge junk pile in another/ galaxy. There are billions of bodies. /It’s 1,000 degrees below/ zero but compacted souls don’t need heat” (40). It also allows Harrison to describe the deaths of many people he loved without being overly sentimental, as is demonstrated in the following lines from “A Ballad of Love and Death about Elsa.” “I wondered/ how long Elsa could see, and what./ I found a patch of blood-crisp grass/ where her head must have rested/ surrounded by shards of windshield” (19).

This same removed nature may however be problematic for some readers. Harrison’s tendency to briefly summarize a person’s character and focus instead on his emotional-experience of that person’s death comes off as insensitive at times. Further, poems like “A Ballad of Love and Death about Elsa” risk harmful appropriation of a character’s story. While the poem is an undeniably beautiful description of the speaker’s emotional experience, Ella as a character is not detailed until the end of the poem, and the details provided are “She was a fine gardener with a sweet,/ warm voice” (19). Given that Elsa is someone the speaker allegedly loved, it seems belittling to have one of two ways the speaker describes Elsa’s character to be “fine” as a gardener. In this context the word “fine” could mean ‘spectacular,’ or just mean ‘fine’ – as in not above or below average skill at gardening. Regardless of the ambiguity, readers are given only two things to remember Elsa: as a gardener and a woman with a nice voice. The former is a hobby, and the latter is an aesthetic description of her beauty. Harrison’s dismissal of character descriptions beyond surface details may contribute to the nihilist theme that none of us matter and were all going to die, but moments like this in the book ooze male gaze, and harmfully condense a person’s story. By using a phrase like “She was a” in remembrance of someone, then using your authority as an author to ascribe undisputed significance to their life and death, you are essentially telling that story for them. If a person is dead or fictional, and cannot dispute the story you’ve told for them, you are also essentially claiming their story for yourself and undermining their achievements.