A Shout-Out to Sci-Fi, by Andrew Brabeck

The best thing I have read recently was not written recently. It was published in January of 2012 by Daily Science Fiction, an online journal which publishes science fiction and fantasy shorts. The story, called “Visiting Planet Earth”, is a short story written by Eric Brown.

Let me preface this by saying, science fiction is sometimes ignored or brushed off by the so-called educated class. But before we allow this work, or any others for that matter, to become the victim of nose-snubbing simply because of the genre it falls into, let’s give it a chance. Science fiction is not a genre merely for those looking for a cheap method of escape, as is often the argument against it. Though it does provide that, but then again so does all fiction. Science fiction allows us to explore the possibilities of this world, not escape it. It expands the human understanding in a way normal fiction, bound by the limitations of this world, never could.

“Visiting Planet Earth” is a short science fiction story about an ancient and ageless alien who comes to Earth to watch humanity. The alien has no name, at least none that we are told about. While watching earth, it is discovered by a child. The alien marvels at the child’s innocence, which it recognizes because the child has no “trail”. Trailing, we are told by the alien, is what happens to mortals during their lives. The alien can see all the people in a person’s life who have died before them trailing along after them. This is part of the reason it says coming to earth is too painful.

“Visiting Planet Earth” is written beautifully but simply. Though a story showing the innocence of a child is nothing new, that innocence is given a new feel when seen through the eyes of an immortal alien. The story is a reflection on the youth and innocence of the human race as a whole and a reminder of the backs we are standing upon to reach even this high. Though it is short, only about two pages, this story finds a new way to grapple with our mortality as a species and forces the reader to look at us, humans, as if they were not one.

Eric Brown lives in England with his family and is the two time winner of the British Science Fiction Award for short stories. He has published many short stories and novellas and has written over twenty novels and a handful of children’s books. His most recent novel is called Satan’s Reach and is the second novel in his Weird Space series. 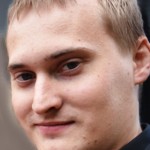 Andrew Brabeck is an undergraduate student at Hamline University. He is in the BFA program studying Creative writing with a focus on fiction as well as the BA program studying philosophy.  He lives in St. Paul, Minnesota.